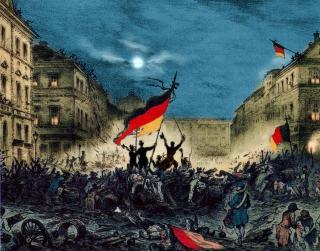 My favorite question on Quora today was: “Did German identity exist among the average person in the areas that would become modern Germany before the age of nationalism?”

German nationalism first appeared in 1770 with the German movement, which primarily opposed the political-cultural hegemony of France. The goal of the German movement was to eliminate German petty statehood and bring about the establishment of a centralized, unitary German state.

German early nationalism was generally considered to be literary-philosophical-pedagogical and was influenced primarily by such individuals as Friedrich Gottfried Klopstock (1724-1803), Gotthold Ephraim Lessing (1729-1781), Johann Gottfried Herder (1744-1803), and by the young Johann Wolfgang von Goethe (1749-1832). That is, its bearers were predominantly the German educated elite. Early nationalism is therefore sometimes referred to as „elite nationalism.“

Classical German nationalism, also known as popular nationalism, emerged in the revolutionary years of 1840/49, which also reached a broad stratum of the population below the educated elite. This social stratum was formed primarily by the educated bourgeoisie (“Bildungsbürgertum”). At the time of the March Revolution of 1848/49, they were the main proponents of the political demand to reorganize the German Confederation, which was divided into numerous monarchies and free cities, into a centralized-unitary national state based on the French model. The nationalism of the educated elite and the bourgeoisie was opposed by the principle of the noble nation. This was because the German nobility was unwilling to renounce traditional rights in its sphere and to carry out a democratization of state and society, which would have meant abolishing the previous state system.

Folkish nationalism (“völkischer Nationalismus”) emerged at the end of the 19th century and basically represented the perverted form of classical German nationalism. Now it was no longer the person’s sense of belonging that was decisive, but his „race,“ that is, his German-blooded ancestry.

From about 1890 onward, völkisch nationalism in Germany also acted in a chauvinistic, militaristic, and imperialistic manner. The German ethnic movement, founded in Austria in 1899/1900, saw itself as the bearer of a racially conditioned sense of mission that, in its view, rejected everything foreign (such as national and ethnic minorities) as alien to the species. Therefore, it propagated that only German-blooded people („Aryans„) were Germans in the folkish sense. Jews, Gypsies and Slavs were to be removed or, in case of their „racial suitability“, to be Germanized. This absurd concept ultimately led to the devastating genocide of the Jews and the Gypsies during World War II. In the period between 1933 and 1945, völkisch nationalism in Germany had mostly merged with National Socialist ideology.

Today, nationalism is on the rise again in many countries, including Germany. As George Santayana famously said: „Those who do not remember the past are condemned to repeat it.“