A Halftime Message to Remember 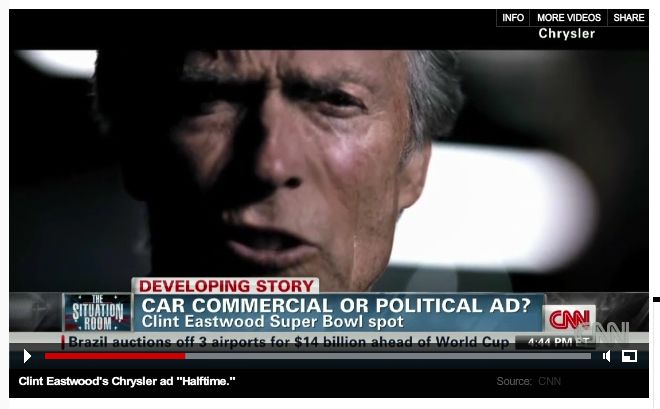 Now I’m really sorry I missed the Super Bowl 2012. Not because of the action (I could really care less as long as Greenbay isn’t playing), but because I missed the Ad. No, not VW’s canine chorus – I mean the AD, dude!

“It’s halftime in America”, the grainy voice of Clint Eastwood intones as he walks the grimy streets of Motor City. People are out of work and they’re hurting and they’re all what they’re gonna do to make a comeback. And they’re all scared because this isn’t a game.”

The camera cuts to protesters in front of a white pillared government building, as the voice goes on: “It seems that we’ve lost our heart at times. The fog, the division, discord and blame made it hard to see what lies ahead.”

And then the face that looks like it is made from alligator skin pans in as the The Man With No Name delivers the punchline: “This country can’t be knocked out with one punch. We get right up again, and when we do, the world will hear the roar of our engines. Yeah, it’s halftime, America – and our second half is about to begin.”

I would have given much to have caught this commercial first time around. And oh, by the way, did I say that it was paid for by Chrysler. And that the name “Chrysler” wasn’t mentioned even once?

There was instant controversy, with Republicans screaming “foul!” and calling the clip a SuperPAC for Obama. I call it gutsy. Americ needs a wakeup call. We need to get our act together, kick out the deadbeats who have created gridlock in Washington, put greedy bankers on a leash, reign in spending on a military that is too big not to go to war, start rebuilding our crumbling infrastructure instead, give our kids a decent education, invest in better healthcare and creating jobs.

And we need to stop complaining, silence the negativists who can’t tell us how to fix our country, but are more than willing to tell us who to blame – namely the other side. We need voices like Eastwood’s, and we need messages like “Halftime in America”.

Is this political? You bettcha! Wish we had more of it.