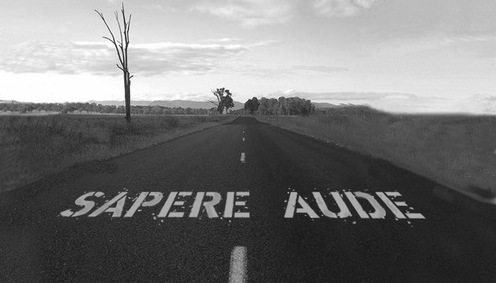 Is this the road to enlightenment?

This is the first of a three-part series

Fundamental change doesn’t just „happen”, even in times of digitalization and networking. Masses of people will need to pitch in first in order to stir up social change. In the processe, they will need to create a whole new set of categories to describe what is happening; only then will they be able to start imagining the new. This means redefining familiar terms and concepts and interpreting them in new political and philosophical ways. The “unthinkable” is only so because we lack the words to think it.

But writing a new dictionary isn’t enough; we need to fill these terms with new meaning denoting new values that are so compelling that people will invest their time, their treasure and possibly much more to achieve them.

Following the brutal murder of French journalists working for the satirical magazine “Charlie Hebdo”, people all over the world united in condemning the attack on the right of free expression. Some reminded us that this right was fought for by people with the courage to risk their very lives for an idea born from Rational Enlightenment. We will need to harness similar powers of convictions if we can ever hope to reach Digital Enlightenment.

Whenever people discuss political and philosophical ethics, they first have to agree on a common terminology. Only then can they start describing a new moral standpoint in order to elevate it to the level of a universal ethical principle. Kant had a similar problem in his day, and he went so far as to demand that the terminology used in a discussion of ethics must actually contain the elements of that ethic in order to lead to relevant results.

Ethics never stands alone; it must emerge from a discourse between conflicting systems if is is to stand the test of time. The history of philosophy is full of examples, from Aristole’s Nicomachean Ethics to Kant’s Categorical Imperative which contains his “Groundwork of the Metaphysics of Morals”, as well as the ancient Indian Bhagavad Gita or, in modern times, Jürgen Habermas and his Discourse Ethics. Without dialogue, ethics are nothing.

By the same measure, any future ethical system, in order to be acceptable to society in general, will require wide consensus about the values it is to represent. A proper terminology is crucial here if we all are to clearly understood what we are talking about. Any yes, a certain amount of controversy is to be expected, since different groups represent different interests. That is why Kant took such care in defining the terms he used to describe rational enlightenment.

New vocabulary for a new system of ethics

An ethical system of philosophy that is not based on a common terminology and full understanding of first principles can only be pontific and pastoral. After all, such a system cannot call upon a deity for its own justification.

Kant is quite explicit when he describes this connection between ethics and its own terminology, between ideas and words. These, he said, must already include the ethical concepts they describe. And he insisted that we must be able to think for ourselves, summoning up the courage to use our own powers of reasoning, and this not only in the comfort of our homes but openly and publically.

In attempting to establish ground rules for a new Digital Enlightenment, must aspire to these same lofty ideals. Before setting out in search of new values to guide us, we first need to agree on the terminology we intend to use. For Kant, terms like “reason”, “courage” and “common sense” were his word-tools of choice. Today, we need new ones (although the some of those used by Kant are still valid and important).

We do not deceive ourselves that this book can provide a comprehensive dictionary of the new language of Digital Enlightenment. That will require long debates. If anything, this book can lead to a more focused discussion on the part of those concerned — which means everybody, regardless of sex, creed or color and especially political leanings and cultural tastes. The sheer diversity of opinions and beliefs within the digital community will necessarily lead to the creation of a rich new vocabulary for the Digital Age.

All will be made clear

What we can do, however, is to demonstrate how certain terms can change their meaning to fit the times, so to speak. We will try to show how political and social values can take on new technical, mathematical or scientific meanings under the influence of digitalization and networking, depending on context.

A good example is the word “transparent”, an ambiguous term if there ever was one. Taken in the context of IT and software development, transparency describes a process that is either intuitive to use of even unnoticed, running comfortably in the background. On the other hand, when the term “transparent” is applied to a political, social or philosophical system, it implies principles that are clearly understood and obvious to everybody.

Users of a “transparent” social network, for instance, don’t need to know how it works to use or be a part of it, and it will continue to function without supervision. The exact opposite applies when you use “transparent” in a political, social or philosophical context, where it is a desirable property because it allows everyone to understand what is going on and where we’re heading.

In any case, in a culture marked by sharing and communicating, transparency is a value in itself because without it no serious and meaningful discussion is possible.

A simple word as “transparency”, used in this way, is of course in danger of suffering semantic overload. However, it is debatable that the reverse is happening. In fact we feel that the term describes quite pointedly what is going on in various social contexts.

In any case, the term clearly refers to itself and its meaning as well as to a value it is closely related to, so it complies with Kant’s definition. A functioning network that is simple to navigate and practical to use since it allows us to communicate without us concerning ourselves with its upkeep and maintenance is for all intents and purposes invisible. And we can expect such a network to become popular in a very short time as more and more people discover how easy it is to use, thus leading to the “network effect” described earlier. It therefore will become increasingly valuable, both socially and economically. As a result, the original technical meaning of the word “transparent” takes on a new social dimension.

But even this new sociopolitical dimension, it turns out, can be ambiguous, too. For instance, when we talk about “transparent markets”, we imply these are “free” and function according to clearly defined rules. The opposite would be a “regulated” market where the rules are set up by someone else. The strictness or arbitrariness of these rules will depend on the political instincts of the regulators instead of on how market usually work; no wonder they are so beloved by conservatives and others who pay only lip service to market liberalism.

In the context of political decision making, transparency takes on yet another meaning. Times were when liberals were fond of it, but it has been largely abandoned by them in the attempts to appeal to conservative voters, so it was taken up by the Pirate parties instead. “Transparency” in this context describes a political process which is open and aboveboard, and where decisions are no longer reached in smoke-filled rooms but are the result of informed debate between citizens of all stripes.

A transparent political system, therefore, is one which functions in full view of the voter according to rules agreed upon by all and bent on achieving goals everyone supports. Transparency therefore can ennoble a political system and raise it above other, less transparent systems.