Battling Life’s Absurdities, One at a Time 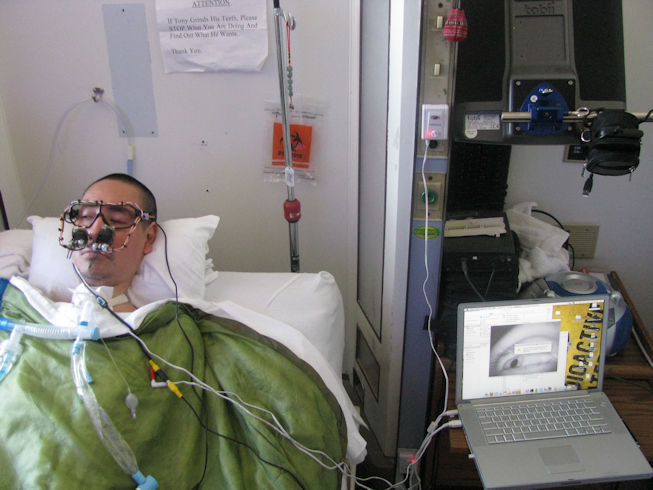 Tempt One with Eyewriter

Mick Ebeling’s life changed when he met Tempt One. If you aren’t a graffiti buff, you won’t immediately recognize that this is a tag or scribble, a stylized signature. When the two first met, the famous graffiti artist was tied to his hospital bed with a network of tubes and breathing apparatus. 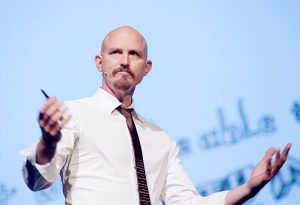 In 2003, Tempt One, whose real name is Tony Quan, was diagnosed with Amyotrophic lateral sclerosis (ALS), a degenerative nerve disorder which causes the body’s muscles to shrink. Nobody knows what causes ALS, and there is no known cure. Right off the bat, Mick Ebling decided that he wanted to help this guy paint again. Since he would never be able to wield a brush, there had to be another way.

At the time Ebeling was working as president and CEO of The Ebeling Group, which dealt with branded content creation, design and animation and general think-tank for film, television and advertising industries. He had been doing advertising and worked on a James Bond movie, so he was deeply into things like animation and production design.

Sitting down with his team, they came up with the idea for a device which, he admitted in an interview for Forbes Magazine, “that we had no business of making”. Called the Eyewriter, it allowed the artist to literally draw with his eyes.

Many weeks later, he recalls, he got an email from Tempt saying, “That’s the first time that I’ve drawn anything for seven years. I feel like I had been held underwater, and someone finally reached out and pulled my head up so I could take a breath.”

Word leaked out, and the world went wild. Eyewriter made it to the front page of Time Magazine as one of the “50 Top Innovations of the Year”. That was the beginning of the Not Impossible Lab.

“Not Impossible is a brand new business model, and it’s a mash-up. We are a technology innovation lab that’s focused on creating things around social good”, Ebeling said. It seemed absurd to him that a gifted artist like Tempt should not be able to paint. It seemed absurd that a young boy in South Sudan named Daniel whose arms were blown off by a landmine. So Ebling and his team flew to sub-Saharan Africa and set up a 3D printer, in effect creating the world’s first mobile 3D printing prosthetic lab. When they left in November 2013, the boy was already able to feed and take care of himself. When Ebeling visited him again in 2016, he was enrolled in a private school in Kenya and had just learned to swim.

Ebeling’s latest dream, set its sights on a goal to revolutionize live music, and, in turn, bring it to an audience who had traditionally found it inaccessible: the deaf community. With help from product development engineers at Avnet, the project named Music: Not Impossible premiered at September 2018 at the Life is Beautiful music festival in Las Vegas. Using vibration-based technology, the product allows both deaf and hearing impaired concert-goers to literally feel live music technology—and experience it together for the first time.

It’s really Mick’s mantra of “helping one to help many” that forms the basis of the Avnet and Not Impossible Labs partnership: the notion of finding a single case on which to base a new technology that can ultimately help the world.

“This partnership allows us to focus on Not Impossible Labs’ highest and best purpose: inventing solutions to the world’s ‘absurdities’ with confidence that our creations won’t languish on a back-office shelf”, says Ebeling. “It really helps us bring our dream to ‘Help Many’ to life.”