Book buring is back 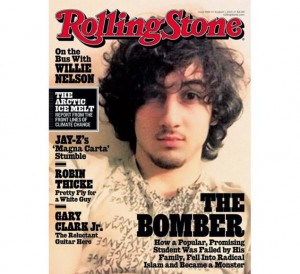 Well, it took awhile, but the great old American tradition of book burning is back again. CVS and Walmart announced yesterday that they are pulling the latest edition of „Rolling Stone“ magazine from their bookshelves becaue of the editor’s choice of a title picture, which shows the Boston Marathon bomber Dzhokhar Tsarnaev, tousele-haired and apparently slightly disoriented, staring into a camera like a later-day version of James Dean after a long night on the tiles.

Apparently some idiots in Boston called the picture „glamorous“, which says alot about personal tastes in New England. Unfortunately, these idiots include Mayor Thomas M. Menino, who sent a letter to the publisher of Rolling Stone, Jann S. Wenner, objecting that the cover “rewards a terrorist with celebrity treatment.”

If you ask me, it looks more like a „dead or alive“ wanted poster.

But, hey, this is good old America, home of the Salem witch burnings, where burning books has been a favorite passtime at least since 1650, when Puritains made a bonfire out of copies of  The Meritorious Price of Our Redemption by William Pynchon ecause it disputed their doctrine of atonement. The Massachusetts General Court ruled that all copies should be burned in the center of the marketplace in Boston. In 1873, Anthony Cornstock founded a committee called The New York Society for the Suppression of Vice within the YMCA of New York, to supervise public morality by burning books and who was the inspiration for the infamous inspired the passing of Cornstock Act, a Federal Law that made it illegal to own, sell or send through the mail obscene material.

In the early 2000s, Harry Potter books were burned for their „satanic“ content in New Mexico, Michigan and Pennsylvania among other places, joining a list of distinguished authors who have included at times Mark Twain, James Joyce, John Steinbeck, Wilhelm Reich, Kurt Vonnegut, and Dan Brown.

So let’s congratulate CVS and Walgreens for upholding on of America’s shining democratic traditions. Why not celebrate by burning come of their coupons as a bonfire of bigotry and narrowmindedness?