Doctrines are for dummies 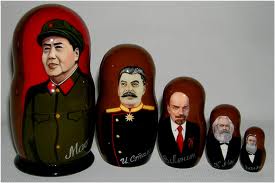 Their time is over

As we enter the Age of Digital Enlightenment, an important question we need to ask ourselves is whether a networked society still needs monolithic, ideological constructs such as the notion of the nation state in order to function.

The same goes for many other worldviews and doctrines of salvation such as those which sprang up in the 19th and 20th centuries. Communism and capitalism, fascism and anarchism, Kodoha in Japan, Rexism in Belgium, the Acción Revolucionaria or „Gold Shirts in Mexico, as well as a host of other universal dogmas and weltanschauungen came and went, each claiming to light the only true way to true human happiness and welfare for all. Anyone who disagreed, of course,  had to be expelled or purged, either by sentence of exile or death.

Now, the era of ideology is finally coming to an end, and good riddance, too! Digital societies will be based by necessity on common-sense and consensus, not because we have all suddenly and collectively become smarter, but because digital enlightenment will make it increasingly difficult for us to believe in pat solutions to improving the human condition. Instead we will need to come up with convincing arguments and systems that actually work, at least for us and those around us.

In this future world of digitally enlightened individuals the ability to think for ourselves and in real time will be crucial. Gone are the days when a Lenin or an Henry Ford could call the pace by which society marched ahead, everyone gaily swinging their arms and singing in time.

In his book, The Wealth of Networks, Yochai Benkler , the Berkman Professor of Entrepreneurial Legal Studies at Harvard Law School, predicts that networks will be the structure upon which economic progress and political organizations will be based. These structures will necessarily be in a constant state of flow, thus differing fundamentally from rigid, doctrinaire societies based in the past on some political or religious mythology or another.

Benkler sees communication and the exchange of important cultural and economic assets in the networked economy as the drivers of future growth and fortune. Classical economic theory, of course, reduces growth to the two factors originally identified by Adam Smith in the 18th century, namely capital and labor. These “hard” factors alone are considered to govern changes to national output in developed countries. Non-profit labor is not considered by classic economy to be valuable at all, since it is not seen as productive or as creating value.

Benkler points to such new developments as the Open Source movement or the online encyclopedia Wikipedia as examples of what he calls Commons-based Peer Production which, for him, represent a counter-concept to the currently accepted rationality and selfish behavior of homo ecconomicus.

The media are a good example of what he means. It used to be that printing a newspaper or running a broadcasting studio were much too expensive for most of us, so it was delegated to certain state agencies or private entrepreneurs who exercised control over their content. Today, in the age of the unbiqutous smartphone, tablet and laptop PC, the physical and economic barriers to creating and publishing content have virtually disappeared, leaving what Benkler calls social production as a viable means of distributing information. In this scenario, everyone is simultaneously producer and consumer of information, making us all shareholders in one of the power centers of modern society.

Those who engage in social production, Benkler thinks, see money as only one of many forms of enumeration. Others include the pride in belonging to a group of likeminded people engaged in a successful and rewarding project (such as Wikipedia) or joining in creating new digital tools for the digital age (as do the programmers who contribute code free of charge to Open Source software).

Traditional, “rational” economic models fail to take these forms of “payment” into account — and therefore miss the important point that people in the digital economy increasingly see these rewards as more desirable and motivating than a monthly paycheck.

Unlike industrial production, Peer Production leads to greater autonomy for the individual who is no longer dependent on centrally organized communication or on technology provided by employers, and who is therefore no longer dominated by them. This explains why television viewing by many people, especially among the younger set, is in decline, as well as other regulated forms of entertainment controlled by business interests.

Access to a wider range of information in turn contributes to a growing critical awareness on the part of users who will learn to discriminate between the significant and the trivial, thus increasing their own ability to think for themselves. Social and political conformity previously nurtured by press and broadcast media will play a lesser role in a networked society shaped by the yellow press and trash TV.

Similar processes are already underway in the world of business, as well. Under the headline “Where Coase went wrong”, one of the authors of this book once described what happens when small companies get access to unlimited digital information. On of the central tenets of Ronald Coase, the British economist and 1991 Nobel laureate, was that large corporation enjoy an intrinsic advantage due to their ability to internalize so called transaction costs which include the gathering and processing of market information. Production costs, Coase postulated, remain virtually identical for companies large and small, but corporate giants have a head start when it comes to finding the right product or supplier as well as other pieces of information necessary for them to conduct their business. Large companies able to internalize all their transaction costs will therefore continue to grow, while small companies will remain stunted and eventually fall by the wayside.

That size matters has long been a mantra among economists and managers, sand megalomania is part of the ´system. As a result, banks, pharmaceuticals, steel barons and car bigger and bigger manufacturers seek their salvation through bigger and bigger “mega-mergers” until they can become “global players”, the ultimate goal of every industry titan, at least until the anti-trust watchdogs wake up. And even then, there are always hired political handy to provide the necessary exceptions and special permits that enable them to grow unchecked. After all, huge multinational conglomerates are a matter of national pride as well as affluence, and their state of health is often a matter of national concern.

In the stormy months of the Great Recession of 2007, the first cracks seemed to appear in this culture of gigantomania that focuses on company size as the sole determinant of success. In order to save the car manufacturer Opel, Germany was forced to mortgage its economic future to the tune of some 6.5 billion (about $8.3 billion) because, like the giant insurer AIG in the U.S. which initially cost American taxpayers at least $85 billion (most of which hs since been recovered), it was deemed “too big to fail”.

Not only critics of capitalism increasingly ask themselves whether big multinational corporations are really necessary, or if they couldn’t be replaced by smaller, more agile companies. How many Lehmann Brothers can we afford before the whole system comes crashing down? And are conglomerates flexible enough to survive in an economic climate that is apparently marked by rapid ups and downs, by shortening cycles and the rise of superfast trading?

In other words: Do we need a “New New Economy”?

The term first surfaced in an article by Chris Anderson, the former editor of Wired magazine and author of The Long Tail, where he describes an economic future in which startups and small companies will replace corporate giants as the driving force for growth and progress.

The future, this implies, belongs to small companies. Thanks to electronic procurement, trade portals, intelligent software agents for e-commerce and e-business, and software-as-a-service (a kind of rental system that allows companies to turn capital costs into operating expenditures), small companies are catching up with the big boys in terms of transaction costs. The result is a level playing field, where small, nimble proponents can easily outwit and defat the cumbersome corporate dinosaurs in a classic game of survival of the fastest and fittest.

Results are already to be seen. The “Big Three” car manufacturers in America, for instance, have begun to outsource entire components such as power trains or suspension systems to small (or at least: smaller) contractors and in the process reinventing themselves as “networked corporations”.

And another factor is helping small companies succeed: cloud computing, which essentially means outsourcing your IT infrastructure, leaving small companies to concentrate on what they do best, namely their business. Instead of keeping lots of capital and manpower wound up in maintaining computer systems, networks and data storage, they can simply rent as they go, adding capaicity when necessary and booking everything under operating costs. This in turn makes them even more flexible and ready to expand into new areas or grow their existing capabilities.