Donald Trump, Typoglycemiast: Elected to lead, not to proofread! 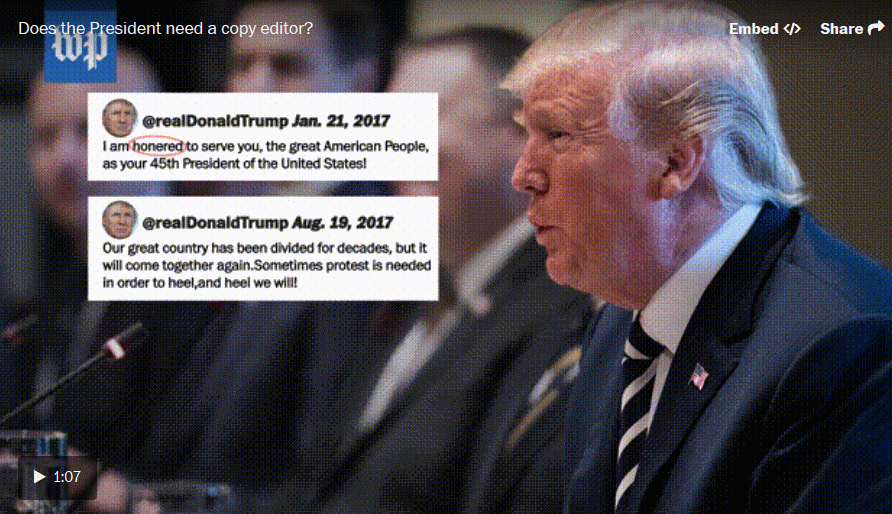 Just about everything about Donald Trump – his hairdo, his sixth-grade vocabulary, his inability to focus on complex issues, his tendency to grope first and think later – have been fodder for journalistic witticisms in the past, but leave it to the Washington Post’s Dave Nakamura to add another wrinkle to the list of the President’s basic deficiencies: spelling.

Of course, since the now legendary “covfefe” affair, the world has grown used to Trump making up not only facts, but entire words. Some observers say that the number of typos in his tweets has been growing recently; a sign that he’s beginning to crack under strain? “Special Council is told to find crimes, wether crimes exist or not”, he typ(o)ed in the wee hours of last Wednesday, going on to misspell “counsel” three times and to commit five other errors in the span of 280 characters.

As someone who would be completely lost (and sometimes still is) without the spell checker in Microsoft Word, I actually sympathize with the guy. Still, given the rest of the muddle that marks today’s White House, I find it another cause to worry . Is he simply too lazy to check his tweets before pushing the “send” button? Is old-age creeping up on him, along with numbness in the fingertips and lack of motor control? Or is this just another proof of his general sloppiness and unwillingness to pay attention to detail when making important policy decisions?

And then there is the question that Americans of all stripes and colors should be asking themselves anxiously: Does the President suffer from dyslexia?

A textbook definition of dyslexia states that those afflicted have „conspicuous problems with spelling and writing, in spite of being capable in other areas”. In Trump’s case, this may be debatable, but the guy does have some talents, albeit many of them disgusting, like unerringly putting his foot in his mouth or hiring misfits to important jobs in his administration. But for the sake of argument lets just assume that he does fit this definition; then what?

Like other aspects of dyslexia and reading achievement, spelling ability is influenced by inherited traits. It is true that some of us were born to be better spellers than others, but it is also true that poor spellers can be helped with good instruction and accommodations.

Given Trumps unwillingness (inability?) to follow advice, this poses a problem. A spelling diagnostic test, such as a developmental spelling inventory, will tell a teacher exactly which consonant, vowel, syllable, and word spellings the student must be taught. But will Trump be willing to invest the time and mental effort this would require? Hardly.

Of course, there will also be those who put Trump’s typo-filled tweets down to the general decline of the written language in the Age of the Internet, where smilies, emoticons and emojis have increasingly taken the place to written words. Some linguist argue that this actually enriches the language by conveying emotion and innuendo in ways not possible through the written word itself.

Others will brush over the whole controversy, like Jason Silverstein of the New York Daily News, who maintains that Trump was “elected to lead, not to proofread”.

For months, Silverstein kept a running list of White House typos. His favorite was “unpresidented” (for “unprecedented”), which he thought would make a beautiful headline if Trump were ever successfully impeached.

As someone who first learned to read and write in America at about the same time as Donald Trump, I actually feel with him. Teachers in the 50ies were split into two warring factions: the phoeneticists, namely those concerned with the sounds and signs of language, and the visualists, who asked kids: “Does the word look right?” I was brought up in the visual, or holistic school, so I was encouraged (as, presumably, was Trump) to spell words several ways to see which looked correct. The idea was to stimulate visual memory as a way to identify homophones like pray and prey or tale and tail correctly.

The drawback of this method, as I can attest, is that if a word looks okay, who cares how it’s spelled? And in fact, most people can read whole text passages in which every single word is jumbled, as long as the first and last letters are placed correctly. Scientifically, this ability is referred to as Typoglycemia, a term attributed to Graham Rawlinson who used it in his doctorate thesis at Nottingham University in 1976.

Matt Davis, a Cambridge neurolinguist, famously posted this whopper, which I have no problem reading just as fast and easily as any other English-language text:

“I cdn’uolt blveiee taht I cluod aulaclty uesdnatnrd waht I was rdanieg: the phaonmneel pweor of the hmuan mnid. Aoccdrnig to a rseearch taem at Cmabrigde Uinervtisy, it deosn’t mttaer in waht oredr the ltteers in a wrod are, the olny iprmoatnt tihng is taht the frist and lsat ltteer be in the rghit pclae. The rset can be a taotl mses and you can sitll raed it wouthit a porbelm. Tihs is bcuseae the huamn mnid deos not raed ervey lteter by istlef, but the wrod as a wlohe. Amzanig huh? Yaeh and you awlyas thguoht slpeling was ipmorantt.”

But in fact, this whole discussion about unpresidential  spelling errors actually misses something important, namely the delight they provide. As Michael Ried Roberts writes in Life Sentences: The Pleasure of teh Typo, “unintentional mistakes slow us down a step, and force us to consider, and even enjoy, the human element that lies behind the words we read.”

So I propose we give Trump the benefit of the doubt: If he can read it, fine. Hail the Typoglycemiast in Chief!