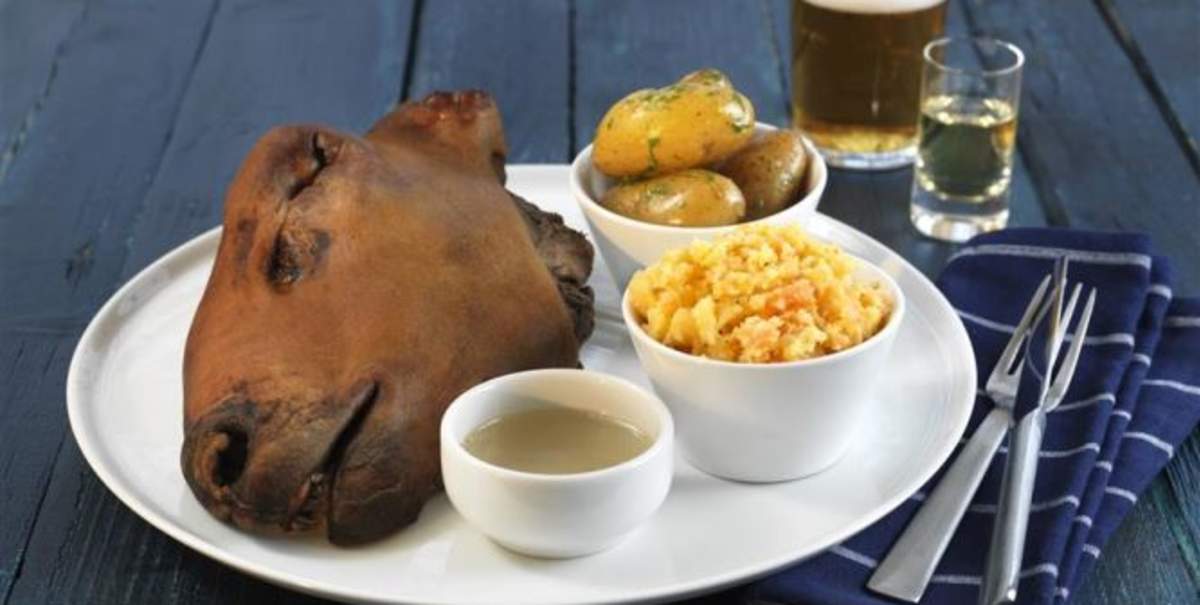 On Quora, someone asked why the Norwegians eat goats head. As a young food journalist, I was invited on an extended trip from Oslo to Bergen by the Norwegian Tourist Board, and ever since I have known that there is much, much more to Norwegian cuisine than herring and shellfish.

In fact, I learned, the secret of  Norway’s gastronomic heritage dates back to the Viking Age and is based on creative methods for preserving food such as salting, drying, fermenting, marinating and smoking.

Smalahove, a sheep’s head (goats are rare in Norway) that is salted, smoked, salted and cooked is certainly  a culinary test of courage. The tradition goes back to a time when resources were scarce and people were forced to use all parts of an animal. I am aware of similar tradition in other European countries, but sadly, the eating of offal has gone out of style almost everywhere else. What ever became of chitterlings or deviled kidneys?

You will certainly impress your friends at home with a photo of a sheep’s head. The dish may look strange, but tastes delicious. Smalahove is typical for the west of Norway. In Voss, about 75 kilometers northeast of Bergen, this specialty is celebrated for several days in autumn at the festival Smalahovesleppet.

Everywhere in Norway, the so-called Nose to tail movement is gaining ground. Here, cooks skillfully prepare all parts of a slaughtered animal so as not to waste anything. This is only a modern revival of the old tradition. Especially among the Sami people in the north, where they eat almost all parts of a  reindeer. The heart is considered a special delicacy.

But there are other strange tastes to explore in Norway. Take for example tørrfisk or stockfish: unsalted cod dried by wind and sun on huge wooden racks in the Lofoten Islands and other areas in the far North. It has played an important role in Norwegian history for more than a thousand years and enabled the Viking explorers to undertake their extended voyages of discovery to Iceland, Greenland and North America, not to mention Russia and the Middle East. Today you can enjoy tørrfisk grilled, cooked, baked or in the form of many other very creative dishes. In small, dried slices, tørrfisk is also a healthy and popular snack in between meals.

If you dare, try cod in the traditional way as lutefisk – lye fish. This is treated with water and lye, which gives it an almost jelly-like consistency. Its taste is mild and harmonizes with other ingredients typical of Norwegian cuisine, such as butter, potatoes, peas or bacon.

Underestimated delicacies such as sea urchins and seaweed have not only found their way into national menus, but have also been discovered by Michelin restaurants. And while you’re at it, don’t miss fried cod tongues, king prawns and rakfisk (fermented trout). The latter specialty is best tried at the Norsk Rakfiskfestival – one of the most popular food festivals in Norway, held in Valdres at the end of October.