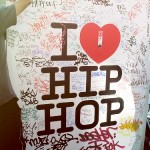 The pace set by digitalization and networking, the one that so many of us have problems keeping up with, has consequences for personality development , too. Common thinking has it that the best of our humanity is expressed through our individuality. This belief is  especially popular amongthe right-wing Republican teapotties and with some short-sighted libertarians who hero-worship the individual, represented in its crudest form by  tough guys like Marlboro Man.

Jaron Lanier, the former musician and Internet critic, is a typical example of this school of thought: Collective, or Swarm Intelligence, Crowdsourcing and the Open Source movement, he believes, are in fact harbigers of something he calls “digital Maosim” which will somehow stifle individual effort and lead one day to the downfall of the middle-class businessman. Been watching too many westerns lately, Jaron?

In fact, psychologists have long realized that individuation is simply one of many normal stages in the development of personality. Almost everyone goes through a phase of defiance at some time in their early lives. This is where adolescents learn to deal with conflict while exploring and developing their own distinctive talents, characteristics and limits. In most cases, this involves reacting against norms and values taught by others (parents, for instance) and establishing a moral compass of one’s own. In the process, most of us learn the art of compromise and eventually come to grips with things we find disagreeable without despairing or going nuts.

The present generation (here the term is correct) is coming of age however without the experience of delayed satisfaction. Whether playing a computer game or buying something online, communicating with others or gratifying lust: Everything seems to happen in real time. Psychologists call this “instant gratification”, and they believe it impedes other important stages in character development such the ability to resist the temptation for an immediate reward and wait for a later reward, also called „delayed gratification“. Some psychologists link this ability to a wide range of other positive outcomes, including academic success, physical and mental health, as well as social competence.

So what happens is we no longer need to wait for our wishes to be granted and our desires fulfilled? What if waiting itself becomes unbearable? After all, the typical onliner no longer has to come to terms with the consequences of their own actions: All they need to do is press a key or click on the mouse to make things happen. And if not, the standard reaction of many is hot, blinding rage.

We seem to be dealing with two lines of  development here that are going on more or less simultaneously. The first is essentially progressive in nature: I am learning something new. The other is a kind of regressive infantilization: a step back in personality development — a return to the “original state” in the womb where it’s warm and comfortable and everything is taken care of for us. It will be interesting to see how young people deal with the resulting psychological tensions.

Theoretically, they could turn into a generation of digital bottle babies. The question isn’t whether this is good or bad. Instead we should be asking ourselves: Is it true or not? The process of infantilization is simply an implicit form of self-indulgence, and as such it has potential benefits. Through it, we may learn to deal with the pressure of living in real time. It may even help us develop vital new skills.

On the other hand, it could lead to frustration. After all, certain types of growing pains are an important step towards maturity. Without them, some may develop a tendency to sidestep frustration by avoiding certain tasks, thus failing to develop the social skills needed to enjoy and to play a role in social communities like family, policymaking or religion.

The widespread disillusionment with the political process among young voters is a good example for this. These kids grew up in a world full of opportunities for instant gratification, so they often lack the patience for protracted discussions about the issues and to search for necessary compromise. Political decision-making takes way too long for them, and there are other things to do in the meantime that are more fun and more self-gratifying.

In this situation,  youngsters have exactly two choices: either turn your back on politics – or start a revolution! We saw how this works when the “Arab Spring” movement took off in late 2010, with pent-up demand for reform leading to a burst of “politics in real-time”, something we will be discussing in more detail in chapter 9.

What was obvious from the start was that the results would be ambiguous: on the one hand “fast-track politics” made alternative forms of political dialogue suddenly look attractive, spawning the Occupy movement in America and the “Pirate Party” in Germany. Suddenly politics was fun: you could be part of it and see change happening while you watched.

On the other hand, the minute politics starts to return to “business as normal” mode as it will once the dust has settled, the zest is lost, and the members of “Generation Now!”, as we will call them from now on, turn back to their laptops, smartphones or game consoles.

So what are the alternatives? Which form of political organization can satisfy the coming generation’s desire for instant gratification without becoming socially irrelevant?

We believe that modern society needs to develop a new understanding of democracy. Digital Transformation and real-time decision making are empowering us and can pave the way a directer, more personalized system. Instead of choosing representatives and sending them to Washington where they make our choices for us netizens should be allowed to choose for themselves. The outcome for society will be a system closer resembling online communities and social networks than yesterday’s representative parlamentarian democracy. Decisions in such a society will be reached “on the fly” and through a variety of channels, depending on what decisions we need to make.

This is in fact just a return to the original idea on which democracy is based, namely small groups of informed citizens in the „polis“ exchanging notions directly in the „agora“, or marketplace. Imagine a lot of „digital agoras“ where ideas and opions are traded and where decisions are reached that effect only tiny communities which, in sum, are parts of the greater communality and finally of the world.

No wonder this scenario looks like a kind of “Facebook Society”: That’s what it is! People coming together as circles of “friends” (or maybe we should better say “online-acquaintances”), connected through digital conduits and able to both stay in contact and reach decisions for the common good.

Much will depend on how large social platforms like Facebook and Google+ develop as they begin to reach critical mass. If Facebook with its 1.4 billion members were a country, it would be as big as China and bigger than India! Anyone who belittles the importance of Social Media simply doesn’t recognize the dynamic behind the development of what we will term the Online Society.

Platforms like Facebook and Google+ possess the decentralized patchwork structures needed to unleash a process of “re-politicizing” their users. Small groups within the larger system offer the potential for people to think and (inter)act as members of limited and manageable social environments with shared experiences and values. On Facebook I am never actually confronted with “everyone”, although I can potentially reach and communicate with anyone I want. In fact I am usually just in touch with my fifty or at most a few hundred active “friends” (besides my thousand-odd less active ones) that have, through one means or another become part of my relational network, thus becoming my reference persons.

In such surroundings, interaction and decision-making happen significantly faster since I am only dealing with people who are important to me — and I for them. The resulting feeling of satisfaction is especially rewarding in an age of digitally limited impulse control, and it creates the desire to jump back into the teeming pool of participatory “grass-roots democracy”.

In this context, “infantilization” can actually be a good thing: Kids have a clear advantage here compared to grown-ups who definitely worry too much!

The question, however, remains: What will the end result be? Will we all develop “Facebook Identities”, similar to our present way of identifying ourselves as citizens of a nation, as adherents to some religious belief system or another, or as members of a community? Or will we remain members of tiny circles of friends and acquaintances to which we either belong for life or move around as the whim takes us, eschewing any really meaningful contact and without and real interchange with other groups within the broader community? And will my Facebook Identity replace other forms of cultural or spiritual self-awareness?

The answer is a resounding “yes and no!” National identity as an abstraction of ourselves will continue to lose significance. Kids in Europe today, at least outside the football stadium, see themselves less and less as “Germans”, “Brits” or “Belgians”. Instead, they think of themselves as “Bavarians”, “Scots” or “Walloons”, but even that is only a secondary identity. In reality, they see themselves as members of some community that convey identity on them, like my soccer club, my neighborhood, my circle of colleagues and friends — and yes, my Facebook friends, too.

The important thing is what interests me in my own particular place in life, what bothers me or makes me laugh (or click on the “thumbs-up button” on Facebook).

Speech and communication will continue to play a key role in this “Facebook Society”, for the simple reason that speech is itself a form of identification. I feel at home where other people “speak my language”, both literally and figuratively. On the other hand there is a clear tendency towards the development of a universal, world-wide “lingua franca” at least loosely based on English but spoken by kids in Bengal as well as in Bavaria or Birmingham. Hip-hop slang, an insider-dialect spoken around the world but often rubbished by professional linguists, is a perfect example: It may lack any discernable grammatical structure or established spelling, but hey, kids understand it!

Once again this just goes to show how human thought is influenced by our external perception of the present. What I am experiencing at this moment is real, always was real and will remain real forever. Other modes of identification such as language, music taste or cultural awareness can come and go. All you have to do is look at how the English language has evolved in the last 200 or 300 years to see that change is a constant and that human beings do a great job adapting to it. We, at least, don’t worry ourselves unduly about the way language skills among Digital Natives are developing.