As a devoted student of naval history in the Age of Sail, I just had to answer this question on Qu0ra! about drinking water and distillation.

Attempts to create so-called evaporators for sailing vessels have been documented since at least the 16th century. Obtaining fresh water from seawater is, in theory, simple,but in practice it presents a number of difficulties. While there are numerous effective methods today, early desalination efforts had low yields and often could not produce potable water.

Blasco de Garay (1500–1552) was a Spanish navy captain in the reign of the Holy Roman Emperor, Charles V and a noted inventor. He is claimed to have found a way to sweeten brackish water, although not much is known about it and it was never widely used. Garay also built and tested the first steam-powered boat in the harbor of Barcelona,which was witnessed by hundreds of people. 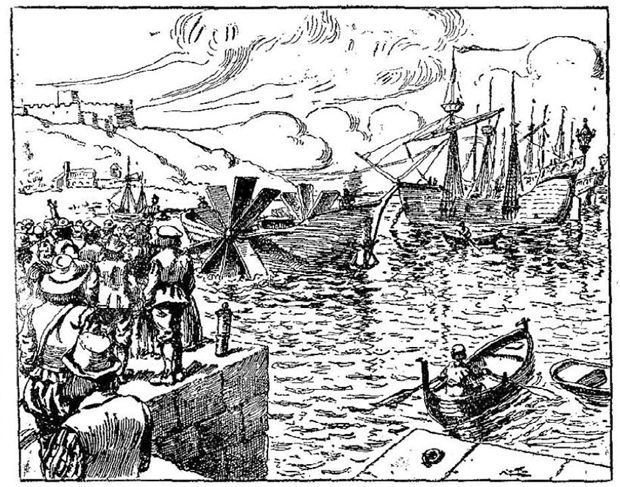 Unfortunately, Spanish authorities later questioned that claim, so it wasn’t until 1807 that Robert Fulton was credited with inventing the steamboat – three hundred years after de Garay!

In 1717, a doctor from Nantes, M. Gauthier, proposed a still which unfortunately didn’t work well on the sea due to the rocking of the ship.

“The Royal Navy of London adopted, in 1771, Dr. Irving’s method of desalting sea water by distillation: Captain Phipps, in his voyage to the Boreal Pole, made use of it, & as this discovery, which was of the greatest importance for all sailors, has not been universally known until now, we will report here a complete description of its principles, apparatus & advantages, as given by Dr. Irving, himself.”

Cook’s Pacific exploration ship HMS Resolution carried a distiller on his second voyage (1772-1775) and did tests to check coal consumption vs. amount of fresh water produced.

On his own voyages, Cook’s contemporary, Louis Antoine de Bougainville, carried a “counter-current condensor” built by Pierre-Isaac Poissonnier which was inspired by the cognac distilleries is use in France in his day. It was described it as “very successful”.

Nelson’s HMS Victory was fitted with distilling apparatus in her galley.

With the development of the marine steam engine, it became crucial to distill sea water for cooling the boilers because salt would corrode them. For this, condensing engines were introduced, but this water was hardy drinkable. The first potable water supply by distillation of boiler steam appeared on early paddle steamers and used a simple iron box in the paddle boxes, cooled by water splash.