IHIP and the Rise of the Service Economy 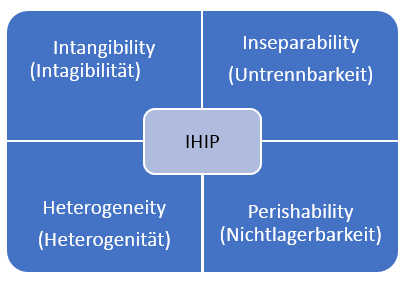 Service is normally considered an essential part of doing business, but in fact, that wasn’t always how businesspeople and academics saw it. With big enterprises frantically striving to turn themselves into service companies (think IBM, for instance), almost nobody disputes that services have a market value measured either per service act or as number of service acts performed within a given span of time. This number can and often is unlimited, as for instance an e-mail service provider won’t charge per mail sent or delivered. Service also has a business value that depends on the value of the service to the customer, in the context of the customer’s own activities or processes. A company providing a service can also profit by increasing its knowledge of the customer and the market. This is called returned value. Customers receive a perceived value from having a stable, profitable, comfortable relationship with a service provider. Obviously, service has or creates all kinds of value, right?

But funny enough, the idea that service by itself creates value is a relatively recent insight. Until just a couple of decades ago most economists, and most marketers, maintained that goods were the basis of all successful business. Repair and maintenance of products and the provision of customer service were considered part of the “augmented” product itself.

The goods versus services paradigm first surfaced in the 1970s and early 1980s. Before that time, research and teaching were mainly focused on manufacturing and agricultural production, whose output was collectively referred to as ‚goods‘. Services were rarely discussed, except in relation to the physical transport of goods through physical channels.

If academics considered services at all, they usually drew on personal experience as customers of banks, airlines, hotels, retail stores, or restaurants. Prevailing marketing theories at this time rested mainly on business-to-consumer (B2C) transactions. Little attention was paid to B2B services. Attempts to consider services broadly and separately met stiff resistance from within academia, but gradually consensus emerged that services had different characteristics from goods and that developing marketing strategies for services based on knowledge gained from goods simply wasn’t enough.

William J. Regan (1963) is widely credited with having coined the term IHIP as the abbreviation of the terms intangibility, heterogeneity, inseparability, and perishability, but he neglected to provide a detailed description of what they mean. Nevertheless, the term became popular among scholars and marketers interested in studying the behaviors of service buyers and developing marketing strategies for services.

At this point it might be helpful to run through Regan’s list and see how others have defined them:

Intangibility: Products like a car or an icebox have tangible qualities that provide information to consumers so they can easily compare one product to another. Services, on the other hand, are intangible. They cannot be experienced or consumed until the purchase is made. Customers can easily end up feeling like they have to make a purchasing decision without adequate information. The job of marketing in this context is to increase the customer’s comfort level by communicating the benefits of the product as convincingly and in as much detail as possible.

Inseparability. Services are usually provided and consumed at the same time in the same place – think a haircut or a lube job for you car. Goods, on the other hand, are usually produced in one place, sold in another and used in a third. The challenge of the service provider is to meet the customer’s high expectations; if not, he or she will be unhappy and unsatisfied. Monitoring customer satisfaction therefore becomes one of the most important tasks of service marketing.

Heterogenity. Manufactured goods tend to have automated processes and quality assurance procedures that result in a consistent product. Services, on the other hand, depend on a variety of factors: who provides the service, when and where is it provided and how? As long as humans provide the service, human error plays a key role, which is why self-service has become such a big part of the service sector. An ATM seldom miscounts.

Perishability. Unused service capacity cannot be stored like an unsold car or bicycle. A restaurant with a fixed staff providing customer service has the same expenses every night, but the restaurant might be half empty some nights. The trick here is to carefully manage supply and demand, for instance by operating with fewer staff during the week and hiring temps for the weekends. The danger here is that not every staff member will be able to provide the same level of service, especially if the owner is forced to draw on untrained subs.

In their book “Management of service operation: text, cases, and readings, W. Earl Sasser, Richard Paul Olsen, and D. Daryl Wyckoff of the Harvard University Graduate School of Business Administration (1978) cited all four of these characteristics, however substituting simultaneity for inseparability.

By the 1980s, it was becoming painfully apparent that, while quality in tangible goods had been exhaustively described and measured by marketers, quality in services were still largely undefined and unresearched. In a widely-read paper submitted to the Journal of Marketing in 1985 entitled „A Conceptual Model of Service Quality and its Implication for Future Research (SERVQUAL)„, Valarie A. Zeithaml of University of North Carolina at Chapel Hill, A Parsu Parasuraman of University of Miami, and Leonard L Berry of Texas A&M University reported on insights obtained in an extensive exploratory investigation of quality in four service businesses and developed a model of service quality based on these experiences.

Although many subsequent authors citing IHIP have referenced Zeithaml, Parasuraman, and Berry (1985) as the source, it is important to emphasize that this distinguished trio of researchers did not invent IHIP but simply ratified it on the basis of an extensive literature review. An even more detailed review by Scott Edgett and Stephen Parkinson (1993), covering 106 publications during the period 1963-1990, yielded similar results. These reviews effectively enshrined the “four unique characteristics of services” as received wisdom.

In a seminal article published by the Journal of Marketing in 1977 entitled “Breaking free from Product Marketing”, G. Lynn Shostack, the Marketing Director for the Investment Managing Group at Citibank challenged perceived wisdom in the field, stating that to be effective and successful, service marketing requires a mirror-opposite view of conventional practices in product marketing. Much of the way we think about marketing is rooted in tangible products, Shostack argued. She claimed that you can’t just swap a service in and act like everything works the same way. One famous quote still widely used today is, “It is wrong to imply that services are just like products ‘except’ for intangibility. By such logic, apples are just like oranges, except for their ‘apple-ness.’”

With this article she was one of the first people to start looking at how marketing can expand its frameworks and vocabulary to truly consider services as their own thing.

Just how far the IHIP model takes us in the digital age is the subject of some dispute among experts. As far back as 1994, Raymond P. Fisk, Stephen W. Brown, and M J Bitner of the Arizona State University in an essay entitled “Tracking the evolution of the services marketing literature” stated that “the current services literature is implicitly mired in the paradigm of ‘low tech and high touch’. The typical need for high levels of human interaction has even led some writers to downplay explicitly the potential contributions of technology to services marketing.” The intangibility, heterogeneity, inseparability and perishability (IHIP) services framework does not fit digital offerings well.”

In an article for AMS Review, the official publication of the Academy of Marketing Science entitled  „The Digital Continuum„, Kathleen S. Micken, Scott D. Roberts, and Jason D. Oliver wrote that “The intangibility, heterogeneity, inseparability and perishability (IHIP) services framework does not fit digital offerings well.” For one thing, they say, digital offerings require physical goods for storage, retrieval, distribution, and use. In addition, there is a move toward access rather than ownership in the digital sphere, so it might make sense to divide marketing exchanges into two broad categories — those that involve a transfer of ownership and those that do not.

The authors offer a different model, namely the “Digital Continuum” between Digital Products and Digital Services which is governed by the mix of ownership, access, and control that consumers and firms share relative to the digital content/files. While many such files are physically stored on the customer’s computer, this does not constitute full ownership, as the content usually remains the intellectual property of someone else. The same goes for software-as-a-service (SaaS offerings, where vendors no longer offer local, hard-drive-based suites but only cloud-based, internet-access-only offerings instead.

Many Digital Services are currently being offered via a subscription model, which brings vendors a number of benefits. In what is known as the Subscription Economy, competitive pressure and the desire to quickly acquire a large customer base may incline firms to set a relatively low initial monthly price, but that still means a recurring revenue stream. Besides, the subscription model also smooths out revenue peaks and valleys. And once the the value of the service has been proved, the vendor can raise prices or offer more expensive versions of the same service with added features that customers deem desirable.

Many service scholars around the world regard the production-oriented IHIP view as outdated because it fails to capture the processual, interactive and relational nature of service co-creation and consumption as seen from the customer perspective. In Consumer Culture Theory, Eric Arnould and Craig J. Thompson claim that service offerings are produced using both tangible resources (such as goods) and intangible resources (such as knowledge, competence and relationship).

In recent years, an alternative theoretical framework for explain value creation through exchange among actors has become more and more accepted. Called Service-dominated Logic (S-D logic), it was developed by Stephen Vargo from the University of Hawaii and Robert Lusch from the University of Arizona. Hailed as the “new marketing paradigm”, S-D logic defines the purpose of a firm’s activity as being able to assist customers in their own value creation processes as opposed to producing and distributing units of output. In this system of thought, the customer is the creator of value and not a destroyer of it. The role of innovation is to help customers create value in a more effective way; it does not mean better goods and services alone. Successful service is measured in terms of customer satisfaction, customer lifetime value, customer equity and the like.

Service – or at least our idea of it – has come a long way, it seems.