In praise of distraction 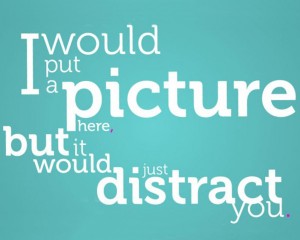 What did you say again?

Nothing enrages cultural pessimists more than when you tell them that multitasking is actually good for you! They think that doing more than one thing at once is a sign of degeneracy and that that kids are getting dumber due to digital technology. Not so, as psychologists and researchers like Linda Stone tell us. She coined the phrase „Continuous Partial Attention Syndrome“, or CPA, back in the 90iers, and she describes it as a necessary way of adapting to an increasingly networked world in which we humans function as nodes, simultaneously receiving and transmitting information within our sphere of family, friends, colleagues and acquaintances.

Kids in fact are becoming increasingly proficient at subdividing their attention in order to perform various tasks sequentially or near-simultaneously, such as doing their homework while listening to the radio and monitoring the e-mail, Twitter and smart messaging accounts. Compared to true multi-tasking, she believes, full attention is not required by CPA (hence the „partial“) and the process is ongoing rather than episodic (hence the „continuous“).

A human being capable of performing a number of task at once is, of course, at an advantage in a networked world where lots of things happen to us all the time: attempts to communicate with us, bits of information fired at us from all points of the compass, ways to entertain us ours for the asking. If you live in a network, than the ability to function like a node in that network, as Linda Stone describes it, is obviously an advantage — possibly even an evolutionary advantage, which would explain why it seems to be arising in its most pronounced form among the younger generation. “We want to connect and be connected”, she writes “We want to effectively scan for opportunity and optimize for the best opportunities, activities, and contacts, in any given moment. To be busy, to be connected, is to be alive, to be recognized, and to matter.”

Survival of the fittest, or at least the most adaptable, hinges more and more on what computer scientist call “network management”, which essentially all about command and control. It is this talent that Stone and her colleagues think the next generation can already be seen to develop. Of course, there is a tradeoff: Kids appear to lack the ability to concentrate fully on a single task. This, of course, worries their parents, who take them to doctors who prescribe pills against ADHD (Attention Deficit Hyperactivity Disorder), a condition that Thomas Armstrong, Executive Director of the The American Institute for Learning and Human Development, calls a “myth”. Even Dr Robert Spitzer, professor of psychiatry at Columbia University in New York and the psychiatrist who identified attention deficit disorder, admits that “up to 30 per cent” of youngsters classified as suffering from disruptive and hyperactive conditions could have been “misdiagnosed.”

In a much-discussed opinion piece for the New York Times Sunday Review entitled “A Natural Fix for ADHD”, Richard Alan Friedman, professor of Clinical Psychiatry at Weill Cornell Medical College, has a fascinating explanation for what seems to be going on among younger Internet users, and if true it means that CPA has always been a psychological trait of some, but not all of us. “Recent neuroscience research shows that people with ADHD are actually hard-wired for novelty-seeking”, which he believes is “a trait that had, until relatively recently, a distinct evolutionary advantage.” Compared with the rest of us, he says, they have sluggish and underfed brain reward circuits, so “much of everyday life feels routine and understimulating.”

Buried deep within our brains is a mechanism which causes the release of dopamine, a neurotransmitter, which plays a major role in reward-motivated behavior. In some of us, dopamine is produced by new and exciting experiences. Drugs, alcohol and sex can act this way, but also the constant pressure we experience from waves of information, e-mails and other content on the Internet that essentially dispel boredom and make life exciting for those whose otherwise feel understimulated.

Friedman takes us back to the early days of homo sapiens: “Humans evolved over millions of years as nomadic hunter-gatherers. It was not until we invented agriculture, about 10,000 years ago, that we settled down and started living more sedentary — and boring — lives. As hunters, we had to adapt to an ever-changing environment where the dangers were as unpredictable as our next meal. In such a context, having a rapidly shifting but intense attention span and a taste for novelty would have proved highly advantageous in locating and securing rewards — like a mate and a nice chunk of mastodon. In short, having the profile of what we now call ADHD. would have made you a Paleolithic success story.”

Research appears to indicate that the number of people belonging to the “hunter” part of our species is growing; at least if we accept that ADHD is an indicator. Recent increases in ADHD rates have been explosive, as well as its treatment through medication. According to the Centers for Disease Control and Prevention the lifetime prevalence in children has increased to 11 percent in 2011 from 7.8 percent in 2003. 6.1 percent of young people were taking some A.D.H.D. medication in 2011, a 28 percent increase since 2007. Even toddlers are fed these pills to “quiet them down” and, presumably, to keep them from getting on elder people’s nerves.

But if Linda Stone is right, we are actually hindering “hunter-types” among younger people from adapting to their new communications environment and thus placing themselves at an advantage over their duller, more sedentary peers. Instead of in terms of generational conflict it would be wiser to accept that there are two distinct groups of individuals in society — hunters and gatherers, as Linda Stone would have it, Richard Friedman’s dopamine junkies and dullards. By enforcing and rewarding the ability to concentrate and punishing (or doping) those who can’t, society may actually be committing a serious crime on its young (or, if you prefer, a sin against itself) by interfering in natural selection!