IoT Harks to the Bees 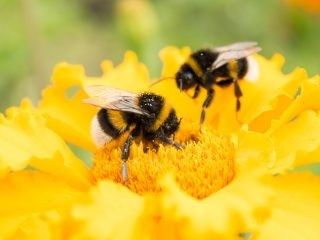 Bees don’t just make honey; they are vital to agriculture as pollinators for all kinds of crops. Unfortunately, bee populations are susceptible to many threats, such as  plagues, climate change, and invaders. Mites, viruses and fungus are the bees’ worst enemies, global warming affects seasonal bee behavior, and bee hunters such as insects, moths, or bee-hunting birds are rising not just in number, but also in level of aggression.

Honey Flow Africa is a Nigerian startup with a multidisciplinary team and years of experience in Engineering management and product design, focusing on beekeeping. Their goal is to use IoT solutions to increase survival rate and population growth and boost of honey production thanks to smart time management of nectar flows.

The company’s BeeTeck Hive Monitoring System automatically analyzes key data markers, thus reducing the number of visits to each apiary. All the beekeeper has to do is to check the computer, smartphone or tablet.

The BeeTeck Communication Module is responsible for receiving the information of all beehives and sending it directly to the cloud. This module allows beekeeper to save money because it’s the only one that needs to be connected to the internet. This network mechanism handles the communication to the hive themselves which can be places and shifted quickly and easily.

“BeeTeck  is the brain of the beehive”, says CEO Amaete Umanah. “This module reads everything about what happens inside the beehive with the swarm, like knowing if the queen is laying, assess if the temperature is comfortable and if the level of humidity is between the sanity levels.”

It is time to digitize beekeeping, Umanah believes. “We empower beekeepers to understand their bees better. Besides, moving from calendar-based decisions to data-driven solutions helps optimize beekeeping operations and keep healthy bees”, he states.

Managed honeybee population stocks are declining in many countries, worrying scientists, the public and politicians. This decline affects people all over the world, as it poses a risk to food security. African honeybees, which mainly live in the wild and more aggressive than their European cousins, can be moved where needed and are not picky about the flower they visit to collect pollen and nectar which they feed on. Exports of honeybee populations to areas in Europe and North America where bees have been dying at alarming rates for the past ten years. U.S. beekeepers have reported losing about 3 out of every 10 bees in the winters since 2006-2007.

Among the causes for their decline are disease and poor nutrition, which are difficult to fix. Another possible cause, chemicals, is uncertain and debated. But that hasn’t stopped bee lovers from fixing blame. Some countries have even made it against the law to use certain pesticides.

By bringing the dynamics of IoT to apiculture, with remote monitoring of the apiaries and identifying the presence of diseases, pest infection, pesticide exposure and toxicity, BeeTeck hopes to solve the problem globally. “Continuous monitoring of sensor data such as weight, temperature, humidity, sound, foraging activity, rainfall, air flow and location, Umanah believes, is crucial maintaining a healthy worldwide bee population.