It CAN Happen Here! 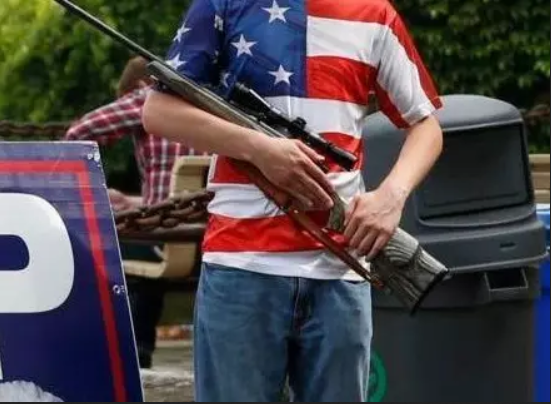 In fact, it already is happening. As far back as February 2019, The American Conservative, a maverick Republican-leaning publication founded by Pat Buchanan, warned about the usurpation of power by Donald Trump. His declaration of a national emergency to build a wall on the Mexican border that Congress had steadfastly refused to fund, the authors said, was one of the worst executive power abuses in U.S. history, if not the worst, because it was employed to usurp the power of the purse—the most important congressional check on executive overreach.

So, we know that Trump will not shrink from trashing the Constitution to attain whatever political goal he happens to pursue at any given moment. But would he actually go so far as to stage a coup if, as seems increasingly likely, he is voted out of office this fall? New York Times columnist Roger Cohen seems to think so, when he asks his readers the question, “Will he concede if beaten by Joe Biden in November?” Or put another way, can a liar accept a truth incompatible with his devouring ego? Cohen believes that the need to pose these questions reflects the depth of our national nightmare.

Seen in this light, Trump’s baseless allegations of mail voter fraud that earned him the first-ever fake news alerts from Twitter against a sitting head of state assume a more sinister aspect. Maybe this is not just a spoiled kid throwing a temper tantrum against grownups slapping his wrists for his constant lying. Maybe Trump is in fact already preparing his ground for E-Day +1?

What would happen, for instance, if he were to declare another national state of emergency a day after the election because he has “compelling evidence” that the voting was massively flawed because of mail ballot fraud? Whose job would it be to stop him? Or even to force him to actually produce the evidence he claims to have.

Obviously, Congress would need to step in, but given the unwillingness of leading Republicans to stand up to their sad caricature of a President, does anyone really believe they would?

So what would happen instead? At some point, the Electoral College would have to convene – but who would the electors be? What if enough state party committees nominated electors who would follow Trump’s argument that he in fact won the election. By this time, the Supreme Court would probably already have chimed in, but what are the chances of the conservative majority ruling against the hand that feeds them?

Of course, a power grab like this would cause huge international uproar. But what has Trump ever cared for international opinion? America’s standing, already almost completely gone, would reach rock bottom. Maybe the United Nations would try to cast a vote of censure (which Trump would of course veto); maybe NATO would vote to expel the United States; maybe Trump would be barred from attending the next G10 meeting; maybe the Queen wouldn’t invite him to Windsor Castle for tea any more – but what me worry?

But if you do want to worry, then think of what the Trumpistas would do! No one really knows how many of them there are – maybe a third of the population, maybe less – but we do know that they are heavily armed, completely fanatical and collectively deranged. A best-case scenario would be widespread armed uprisings and protests which will make what’s going on in Minneapolis right now look like a walk in the park. Worst case would be outright civil war.

In any case, since we must assume that Covid-19 will still be with us come election day and for long beyond, the U.S. economy, already tottering, will implode, probably never to recover. The U.S. will not be able to sustain its crazy military spending and sink to a second-rate power. China will have won the race for Top Nation status. And dozens of regional conflicts will spiral out of control.

It can’t happen here, you say? Well, it already is happening, unless someone thinks of a way make sure Trump plays by the rules after November 3rd; something he has never shown any inclination to do.