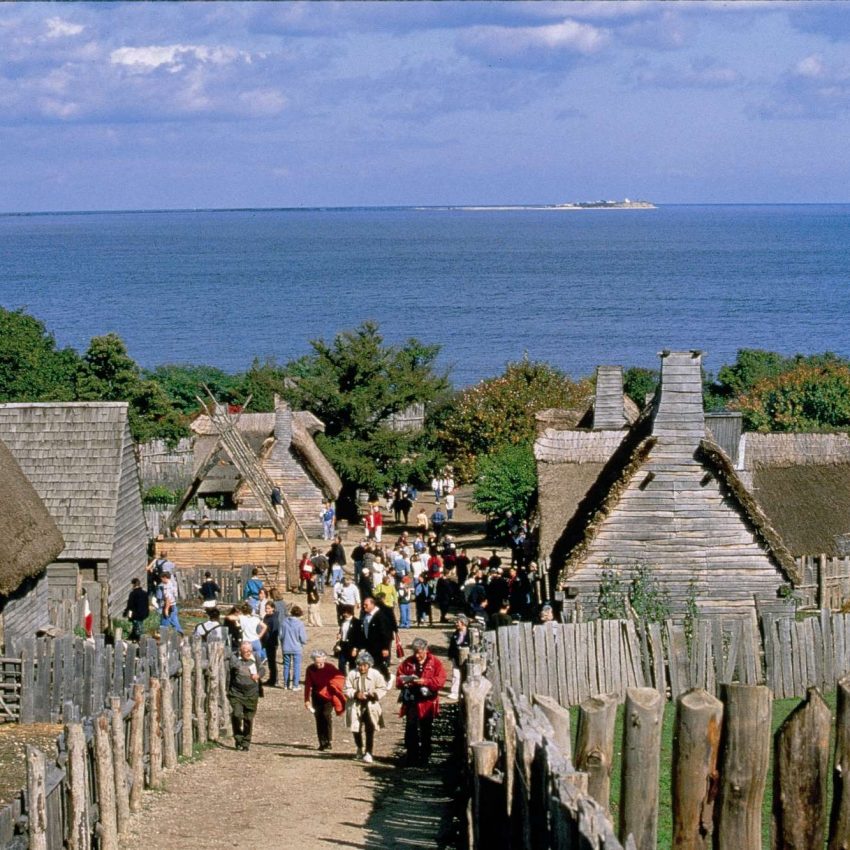 Who were the Pilgrims and what did they want?I answered this question on Quora recently, because I have some skin in the game: My ancestors weren’t exactly on the Mayflower, but they weren’t far behind, either. When I first visited Plymouth years ago, I arrive rather late, and the visitor center was closed. So I went to the gift shop and asked the friendly ladies there where I could inquire about one of my ancestors who was an early settler. „What was his name, dear?“ they asked. When I said „James Cole“, they started laughing out loud. One of them told me: „You’re standing on Cole’s Hill! This used to be his farm, and he operated a tavern right next door.“

This piqued my interest, and I have subsequently done some research on the lives and mores of America’s most famous group of immigrants. And what I found wasn’t anything like the historic myths that form part of popular history about the founding of America. In fact, some of it was downright disgusting.

In England in the early 1600s, everyone was forced to join the Church of England. The Young William Bradford and his friends from Yorkshire in Northern England converted to Calvinism and believed they had every right to belong to whichever church they wanted.

Unlike their contemporaries, the Puritans, who sought to reform and purify the Church of England, the Pilgrims chose to separate themselves from it because they believed that it was beyond redemption due to its Roman Catholic past and the church’s resistance to reform. As so-called Separatists, they were considered illegal radicals by their home country of England.

In the name of religious freedom, they fled to Holland, where their bigotry and intolerance soon made them extremely unpopular, so they decided to move to America, which they considered a „New Promised Land,“ where they intended to establish the Plymouth Colony as a kind of “Kingdom on the Hill”.

For this purpose, they charted a small ship, the Mayflower, and eventually made it first to Cape Cod and then to Plymouth, where they founded a settlement, the Plymouth Plantation. However, the winter was harsh, and before a year passed, half the settlers had died. Without the help of the local indigenous people to teach them food gathering and other survival skills, all of the colonists would probably have perished.

They thanked the natives by encroaching on their land and mistreating them, which finally led to King Philip’s War which was named after Metacomet, the leader of the local Pokanoket tribe. The Pilgrims called him Philip because they couldn’t pronounce his real name. This turned into one of the most bloody war in American history, leaving 5,000 dead, two-thirds of them tribal members. In terms of percentage of population killed, King Philip’s War was more than twice as costly as the American Civil War and seven times more so than the American Revolution.

My own ancestor, James Cole of London, moved to Maine in 1632 and resettled to Plymouth in 1633, where he purchased a tract of land on what is today known as “Cole’s Hill”, which included Plymouth Rock, the place where the Pilgrims, according to tradition, first disembarked from the Mayflower. He later opened the first public house in the colony (in fact, probably the first in New England), much to the chagrin of the community elders because he sold “strong waters” even on the Sabbath, for which he spent time in the pillories.

According to the biography prepared in 1908 by a member of the extended Cole family, James’ son Hugh, who was born in London but moved with his parents to Plymouth, became good friends with King Philip and actually purchased a farm from him on what later became known as Cole’s River. At the commencement of the war in 1675, two of Hugh’s sons were captured by the natives and taken to King Philip, who ordered them set free because, as he said, Hugh had always been his friend. He sent word to Hugh that he could no longer restrain his warriors, and that Hugh should take his family to Rhode Island, which was a wise idea because Hugh Cole’s farm was the first to be burned to the ground. The relationship with Philip seems to have soured, and Hugh became a sergeant in the war against him.

All this has very little to do with the romanticized tales of the kindly Pilgrim Fathers which form the bedrock of traditional American history. In fact, they were real bastards who forced member of other religious groups to attend their church services every Sunday. Because Quakers refused to do this, their males were not „admitted as free men“ and not allowed to „be employed in any place of trust“, and they were often fined for refusing to take oaths and attend the Pilgrim church services. Among other horrible things, some Quaker immigrants fleeing from similar prosecution they had themselves endured in England were executed, and others had their ears cut off. For many years, Quakers faced banishment, their expulsion involving being tied to a cart, stripped to the waist whatever the weather, and whipped as they walked behind the cart all the way to the border.

Not the nicest of folks, really, and not exactly the kind of ancestors we should all feel proud of.