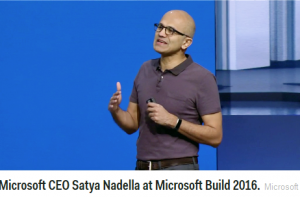 Robots have hands and feet, arms and legs, a torso of some sort or another and a kind of head sitting on top, maybe with bulging, fly-like facetted eyes or camera lenses that stare back at ist human interlocutor. If that is what you think robots of the future will look like, think again. Chances are robots in 2020 and beyond will look more like a can of sardines.

In recent years we have seen a host of machines that perform household tasks like vacuuming the floor, carrying out the trash or mixing us a cocktail in the evening. Here, again, appearances are deceiving. In reality, robots will most probably simply talk to us, answer our questions, remind us of appointments and just generally be there when we want them.

Yes, they will perform tasks for us, but these will be more in the nature of knowledge work: Finding flights and booking tickets, contacting our favorite restaurants and seeing if they have a free table, scheduling doctor’s appointments and whistling up a cab.

In fact, talking may very well be the way we will interact generally with technology. Forget keyboards, computer mice or touchpads! Instead, just join the conversation…For one thing, we need to rethink out notion of what a robot really is. The preconceived idea of a humanoid mechanical servant that will constantly be at our beck and call harks back to the days of butlers and housemaids (or, worse, human slaves).

That is not what robots are destined to become, says Nicolas Carr, author of numerous bestsellers such as Does IT matter?, The Shallows: What the Internet Is Doing to Our Brain, and Utopia is Creepy. He has proven uncannily accurate at predicting important future trends in technology, and in a recent opinion piece for the New York Times, he mused about the future role – and appearance – of robots, writing that “A robot invasion of our homes is underway, but the machines — so-called smart speakers like Amazon Echo, Google Home and the upcoming Apple HomePod — look nothing like what we expected. Small, squat and stationary, they resemble vases or cat food tins more than they do people.”

Marketed as “smart speakers”, these devices are powered by “chatbots”.  Apple’s Siri and Amazon’s Alexa have already become household names in America, but the field is widening almost daily. In China, Xiaoice has been an digital friend to millions since 2014.

One big reason the tech giants are fixating on chatbots is that there is a widespread feeling that today’s technological limitations will soon be overcome. If you have interacted recently with a chatbot or digital assistant, you know how frustrating it can be. Chatbots are often overwhelmed the minute one goes beyond very basic requests.

But recent advances in Artificial Intelligence (AI) and especially in self-learning algorithms have opened the door to much more sophisticated chatbots. Microsoft, for instance, designed its Cortana chatbot from the very beginning to it would get smarter with every use, learning the people it interacts with and fine-tuning itself to anticipate their wishes. AI-powered conversational interfaces generate huge amounts of the data which, over time, will make these systems even more useful.

Another reason chatbots are so hype is a change in consumer habits and the runaway success of messaging apps. In 2015 the number of monthly active users quickly surpassed the number of active social network users, according to a report from Business Intelligence, a news website. One year later, WhatsApp reached the one billion user mark, meaning roughly one in seven people on the planet use the Facebook-owned messaging platform. Their Chinese competitor, WeChat, claims to have 768 million daily logged in users as of September 2016.

In Tandem with smart speakers, chatbots – essentially talking computers – have been quietly entering homes around the world. According to eMarketer, there were more than 35 million of them in American homes in mid-2017 – more than twice as many as just one year ago. McKinsey, an analyst company, predicts that three-quarters of U.S. households will own at least one of the gadgets by 2020.

“It’s not hard to understand the attraction”, Carr says. “Smart speakers are oracles of the countertop. They may not be able to speak for the gods, but they can deliver reports on news, traffic and weather. And they have other talents that their Delphic ancestor couldn’t even dream of: They can serve as D.J. They can diagnose ailments and soothe anxieties. They can read bedtime stories.They can even bark like a watchdog to scare off burglars. And they promise to be the major domos of home automation, adjusting lights, controlling appliances and issuing orders to specialized robots like the Roomba vacuum cleaner.”

Building a humanoid robot is tricky. Illah Nourbakhsh, a professor at Carnegie Mellon specializing in robot design and author of the book Robot Futures, reminds us, it requires advances not only in artificial intelligence but also in the complex hardware systems required for movement, perception and dexterity. “The human nervous system is a marvel of physical control, able to sense and respond fluidly to an ever-changing environment”, he maintains. Achieving such agility with silicon and steel lies well beyond the reach of today’s engineers, Nourbakhsh believes.

Building a chatbot and channeling it through a set of smart speakers, on the other hand, is childs play for the big tech companies such as GAFA (Google, Apple, Facebook, Amazon) and their ilk. After all, messaging has become a major way people interact with their smartphones, so companies want chatbots to literally become a part of the conservation. A group of friends could, say, be discussing evening plans and seamlessly order movie tickets. Oracle recently surveyed major companies around the world and found 80 percent plan to use chatbots for customer interactions by 2020 and 36 percent have already started implementing them.

As the dominant player in the field of messaging services, Facebook with its Messenger platform and its ownership of WhatsApp is poised to take the lead. Facebook currently has 1.2 billion people using Messenger and over 100,000 monthly active bots.

Mark Zuckerberg recently showcased an AI-powered virtual assistant, codenamed “M”, to a handful of tech journalists. When M is asked a question it can’t answer, it calls in human backup. Every time  human intervention in required, M learns from what its human helpmate does. can scan your It can kibitz human conversations, either vocally through smart speakers or online, for certain keywords and contexts. Let’s say you some money or want to take a trip, M can suggest ways to transfer money or hail a rideshare service. Users can tell M to directly split a restaurant bill, share music, or order food without leaving the conversation.

Microsoft CEO Satya Nadella believes that chat-based interfaces will eventually become the primary way people use the internet, replacing the graphical user interface, the mouse, and touch screens as the next big way to interact with computers. “Intelligence will be infused into all of your interactions. That’s the rich platform that we have”, he told the audience at Build 2016 in San Francisco, where he unveiled his company’s grand vision of „conversation as a platform“ — making bots that understand natural language the next big way to use computers. Conversation as a Platform, he believes, will “fundamentally revolutionize how computing is experienced by everybody,” in a paradigm shift comparable to the development of the web browser.

Microsoft showcased how this might work using Skype, which it acquired in 2011 for $8.5 billion, demonstrating how Cortana can team up with various bots to plan a holiday — all without leaving the chat window. The company also demoed what it calls the Microsoft Bot Framework: a toolkit of code and machine learning programs to let anyone build their own chatbot.

Amazon has been following Microsoft and Facebook’s lead by creating Lex, a powerful conservation interface tool that uses the same technology as their Alexa chatbot. Amazon allows developers to create conversational apps or chatbots for chat services, IoT devices, or messaging services using a simple set of tools. In his 2017 shareholder letter, Jeff Bezos told his investors to “watch this space. Much more to come.” Analysts believe that Amazon’s focus will be on bringing AI to companies via Lex, with attention on personal assistants for shopping. With over 10 million Echo devices sold, Amazon has its feet firmly placed in the smart speaker market; it is now looking for technologies that will allow it to continue to dominate retail commerce in the long term.

As with every new technology, there are fears that chatbots and smart speakers – the new robots – will not only have benign effects. Nicolaus Carr worries that “whenever you chat with a smart speaker, you’re disclosing valuable information about your routines and proclivities.” Smart speakers, he argues, not only provide a powerful complement to smartphones: equipped with sensitive microphones, they will also serve as in-home listening devices that greatly extend the ability of their makers to monitor consumer habits. Big Brother, he fears, will not be watching us surreptitiously; he will be sitting right there on our living room table.

However, that pans out, smart speakers and AI chatbots appear to be here for the long run. The main reason will probably be convenience, says tech writer Jon Walker, who has been following the the “big 4” technology firms and their chatbot plans for years. “You just ask and it happens”, he says. His view of the future is optimistic: “Based on Facebook’s experiment with an AI assistant that has human backup, it seems that if people have access to a really great assistant program people will use frequently.”

In the meantime, companies like Microsoft, Amazon and Facebook are investing heavily in the technology behind the new generation of stationary robots and personal assistants, and they are betting that they will soon become smart enough to change the way people use technology. Currently, using a smartphone or accessing dozens of apps requires users to take dozens of different actions. That may soon become a thing of the past. Interacting with our machines may soon seem more like sitting around and shooting the breeze with all of your friends.