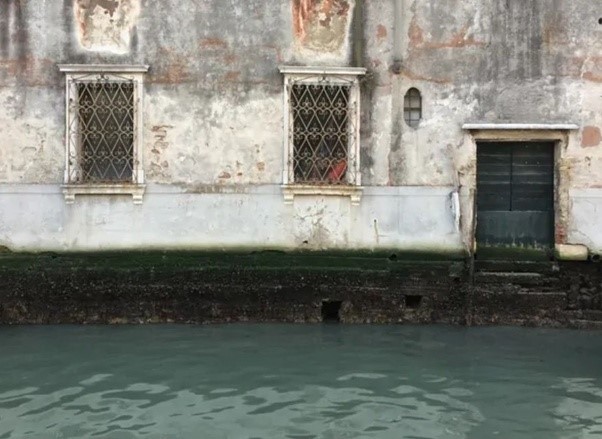 A gatoli at low tide

Somone asked an interesting question on Quora, one that has followed my for most of my adult life since the very first time I visited the city and fell under its spell, namely: Why does Venice smell?

Actually, “Venice stinks” would be a better way of describing the nauseating stench emanating especially in summer from the hundreds of canals and backwaters of “La Serenissima”, which could more appropriately be called “La Puzzona” – the little stinker.

This is due to the fact that Venice, to this day, does not have a functioning sewage system or sewage treatment plants. Until the 1960s, the sewage was slowly directed into so-called „gatoli“, a brick sewer system that eventually led into the canals and that was developed as early as the 16th century.

These tunnels were built of clay bricks and were designed so that the heavier sediment sank to the bottom while the liquid part flowed right into the canal. Today’s septic tanks operate on a similar principle. The solid parts of the „gatoli“ were and still are constantly emptied into special boats.

In order not to clog the outlets of the gatoli into the canals, they were raised further and further over time. As a result, they were exposed at low tide, which had quite unpleasant consequences: stench, terrible hygiene conditions in the canals, rats and swarms of insects – especially the “Chironomide”, a species of non-biting mites. The last major outbreak was in 1987, when I visited Venice and was appalled by the swarms of insects that covered the glass walls of the Vaporetto stations.

A few years later, at attempt was made to map the gatoli, but that proved almost impossible in the end because the system had been changed many times over the centuries. It was also sometimes difficult to understand into which channels the sewage from the houses was actually being emptied. 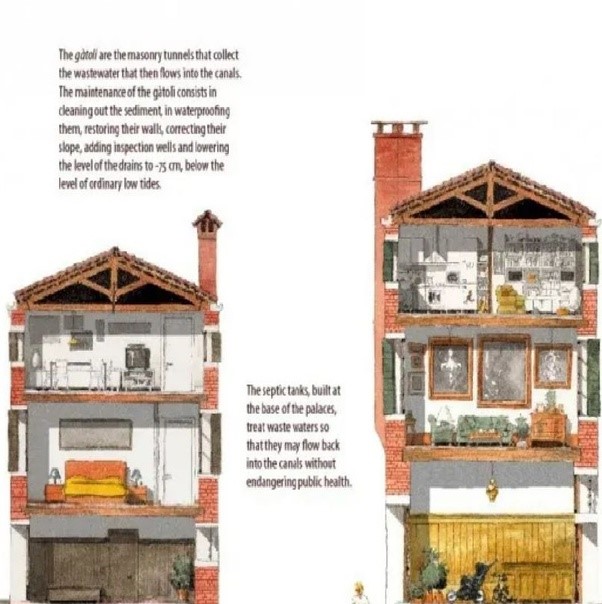 Today there are more than 7,000 septic tanks in the city which effectively constitutes a fragmented, decentralized sewage system. The septic tanks allow wastewater treatment so that the liquid part floats on top and is cleaned before entering the canal. The solid part, on the other hand, must be removed manually. You can see the special boats that empty septic tanks almost everywhere.

Septic tanks are mandatory for all establishments such as hotels, restaurants, cafes, museums, hospitals, offices, etc, but they can also be found in private homes, (where, however, they are not mandatory).

Septic tanks are not always feasible in Venice since they need space and cannot be built on public land or near the supporting walls of a house. The volume of septic tanks is calculated based on the number of people that live in a building, and often that proves impossible.

And even if there is space, digging in the foundations of the houses often expose their supporting piles, hastening their decay, so septic tanks aren’t built if it would seriously jeopardize the stability of historic buildings. In this case, owners fall back on the old “gatolo“ system, which is made impermeable to water and whose outflow into the canal is set so high that it remains submerged even at low tide.

Living in Venice therefore also means accepting the stench. Of course, organic detergents and eco-friendly toilet paper can help a bit, and most inhabitants would welcome it if Venice were to stop discharging sewage into the canals. But the plan to provide Venice with a centralized and modern sewer system had to be abandoned in the end, as Venice would have had to be more or less completely demolished and rebuilt from scratch.

A compromise was finally reached that calls for a combination of septic tanks, maintenance of the existing „gatoli“ and dredging of the canals. Nevertheless, large amounts of fecal matter, waste and, above all, toxic industrial residues and garbage still enter the lagoon. So if next time you visit La Serenissima and the stench gets particularly bad, just hold your nose.