The Stooge Who Would be Emperor 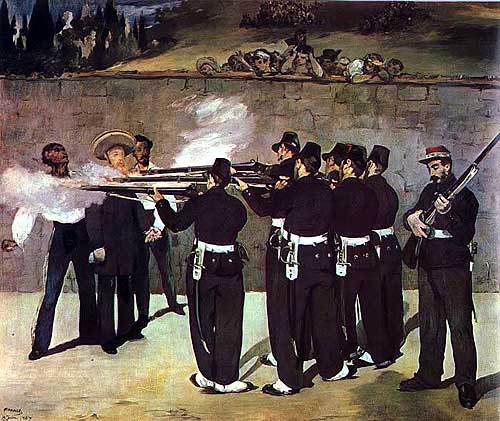 There appears to be some confusion around the events in Mexico between 1862 and 1867, when Maximilian of Habsburg was proclaimed emperor and subsquently shot by firing squad. On Quora, a number of people have asked questions like „How long did the French occupy Mexico“ or similar ones. As an amateur history buff, as well as a resident in the country of Maximilian’s birth, I felt I needed to set the record straight, so here’s what I wrote.

Technically, the French never really “occupied” Mexico. They did try to intervene, however. French Emperor Napoleon III wanted to turn Mexico into a satellite state dependent on France in order to get his hands on Mexico’s cheap raw materials and force the country to buy French goods.

In 1861 he had already briefly sent in troops because Mexico under its Republican president Benito Juárez had expelled both the Spanish envoy and the papal legate from the country. Faced with bancrupty and the growing power of the conservatives, Juárez suspended payments on the 82 million US dollar loans from France, Great Britain and Spain. In 1862, the three European powers retaliated by sending troops to the port of Veracruz to lend weight to their demands. When Juárez conceded, the British and Spanish withdrew, but the French stayed.

Conservative circles in Mexico had already came up with the idea to transform the country, which had been a republic since 1823, into a monarchy in order to secure their power and privileges. Lacking a suitable royal candidate of their own, they decided to try and win a European prince – any prince, essentially – to take over as head of state.

The only problem was the Monroe Doctrine, according to which the United States was set to resist any attempt by a foreign power to colonize in the Americas. However, in 1862 the United States were fighting their own Civil War and were distracted. Napoleon III felt that this was the right moment to implement his plan.

He subsequently offered the Mexican imperial crown to Archduke Maximilian of Habsburg, the brother of the Austrian Emperor Franz Joseph I . Poor Max probably didn’t grasp that he was intended to be Napoleon’s stooge. He was flattered by the offer, and his wife Charlotte, a daughter of King Leopold I of Belgium and Louise Marie of Orleans, was keen on becoming an empress, so she put pressure on her husband to accept. After all, the two had been given to understand that the Mexican people would extend them a warm and hearty welcome.

This was not the case, however: When they arrived in 1864, Mexico was being torn apart by civil war. Most of the country was under control of the Republicans, who were opposed to and kind of monarchy. Thus the newly installed royals were dependent on the grace and military presence of the French. But in 1866, the French were forced by the US to withdraw their troops, and the powerless king became a lost cause.

He was deposed by the Republican troops and, as a symbol of hated foreign rule, sentenced to death by firing squad in 1867 – ascne that was masterfully captured by the artist Édouard Manet in his 1869 painting “The Execution of Emperor Maximilian”. Max asked the soldiers to aim low to spare his face so that his mother would not have to bear the sight of his disfigured corpse.

If we are already on the subject of the tragic history of Maximilian of Mexico, another anecdote might be of interest. After he was shot his body was first embalmed in Mexico, but the procedure was botched and had to be repeated. When the coffin finally arrived in Vienna seven months later, the body was so disfeatured that his mother, Empress Sophie, shouted: „That’s not my son!“

All this fuelled the rumour that Maximilian had been secretly pardoned on the condition that he leave Mexico and hide elsewhere under a false name. According to research by the South American historian Rolando Deneke, Maximilian is supposed to have lived in El Salvador until 1936 as Justo Armas, where he died at the ripe old age of 104.

Justo Armas purportedly possessed numerous objects belonging to Maximilian and was said to have looked very much like him. Armas always made a big secret of his origin. He also always went barefoot, which he justified with a vow to the Virgin Mary for saving him from a great unnamed danger. Although the story is totally untrue, it is typical of Maximilian’s tragically failed life as a monarch over the seas.