Uber, Buzzfeed and the Future of Journalism 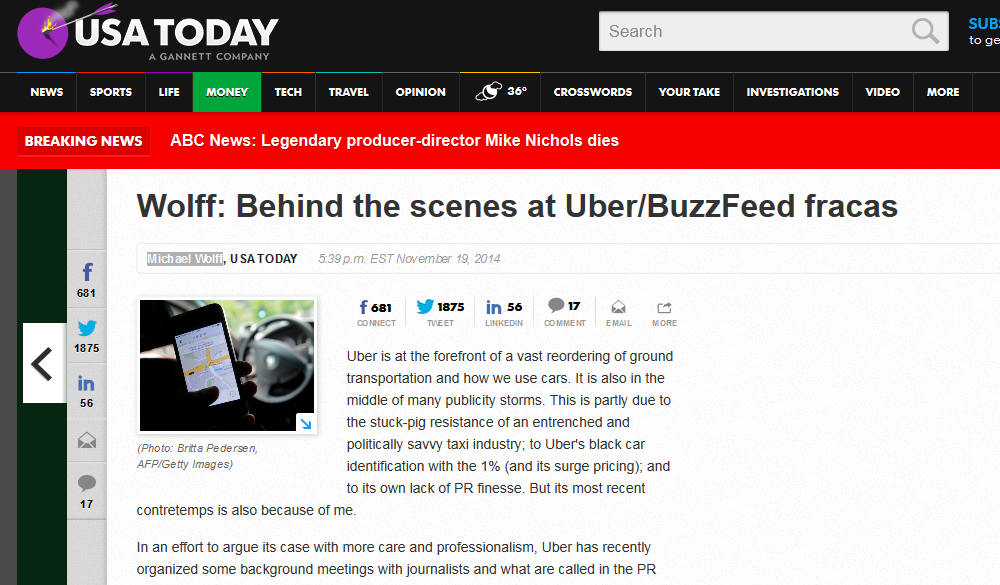 Who do we believe?

Newspapers are dying  – and so what else is new? New Orleans, a metropolis of some 380.000 and number 51 in the list of the largest US cities is without its own daily, since the Time-Picayune went online-only in May 2012. Previously, the Detroit News cut the frequency of its print edition to three days a week. The newspaper industry as a whole has shed at least a fifth of its journalists since 1971, and no end in sight.

On the other hand, blogging has largely taken over as the prime source of news and commentary for many digital netizens, and not only just the young ones. Publishers regularly bemoan this at conventions and trade shows, and in Germany the mass-circulation Bild-Zeitung relys increasingly on what they call “reader-reporters”  for breaking news and exclusive images taken by somebody with a smartphone and the luck to be on the spot at the right moment. In fact, they pay amateurs more than they do professional photographers.

The New York Times famously still claims to run “all the news that’s fit to print”, but that is obviously an exaggeration since paper pages can only hold so much text, while websites and blogger’s homepages are infinitely extendable, and your idea of what’s fit to print may be very different from that of “Auntie Times”.

But is there a difference in quality, at least? To get my first job as a reporter I had to undergo a two-year “apprenticeship”, living and reporting from hick towns out in the boondocks, interviewing old-timers who had just turned 90, noting down fatstock prices, listening to town commissioners droning on for hours or covering the latest deadly car crash on Saturday night. I graduated to a big-town daily and went on to become a – professional – reporter for BILD, where I reached an audience of three or four million every day. By now I can claim to know what I am doing, including what rules serious journalists play by, what you can and can’t do in print, and most of the ethical and legal points involved in those decisions.

Over the past two or three decades, ever since I went freelance and found out that publishers are increasingly unwilling to pay me enough to survive on the proceedings of my newsgathering and editorializing talent, I have been forced to moonlight at times as a “media trainer”: Managers and CEOs, often quite of very big companies, hire me to teach them the ins and outs of journalism and how to avoid some stupid mistakes when dealing with reporters. I lecture them about the growing importance of bloggers and warn against the perils of Twitter and Facebook.

In one of my standard slides it says: “Beware of tech journalists. Most of them aren’t. No one ever taught them to be journalists. In fact, they are sometimes as dangerous as a kid with a loaded Kalashnikov.”

I was reminded rather forcefully of this when reading about the ongoing feud between Uber’s pugnatious CEO, Travis Kalanick, and Buzzfeed’s editor-in-chief, Ben Smith, who reported that Uber  wants to investigate the private lives of critical journalists, presumably as a way to muzzle them. Uber has caught a lot of flak recently for its aggressive strategy, for sabotaging Lyft, its nearest competitor, and for tracking riders without permission. Since Uber wants to go public sometime soon, this is all potentially very damaging to their still-to-be-determined stock market price, so Kalanick hasn’t exactly been pulling his punches in dealing with the tech press.

In fact, it turns out the threat from Uber’s Senior VP, Emil Michael, to “give the press a taste of its own medicine” was apparently distilled from a semi-private talk with Buzzfeed editor Smith at an dinner Uber hosted in a New York restaurant and which was billed as “off the record”. If true, then this a break both of a basic journalist rule and common courtesy to your host. [All of this is meticulously documented in a blog post by Michael Wolff of USA Today how was there.]

Smith, of course, is actually a pro, having started out on the crime beat for the Indianapolis Star and later worked for the Wall Street Journal and the New York Daily News, but his heart has beaten in recent years for the blogsphere where he helped to found three of the leading New York City political blogs, Politicker, the Daily Politics, and Room Eight. In 2011, he left his Politico blog to take over at Buzzfeed. In any case, Smith is part of the burgeoning blog movement and as such more or less an “unlicensed” reporter. Many others lack most or all of his qualifications, so his flaunting of the rules is especially odious, if true.

Like all Web content, blogs can range from extremely informative to mere low-budget advertisement. And anonymity adds a cloak to some self-serving or possibly corrupt bloggers, so most of what is written online should be taken with more than just a pinch of salt. Unfortunately, “too many assume the same ethics are practiced in the blogosphere”, notes the self-appointed “librarian of the Internet”, findingdulcinea.com.

Whether Uber is in fact out to get journalists, or maybe Emil Michael just had a few too many, we may never know for sure. But the resulting storm in a water glass (or wine glass, for that matter) should remind us all that bloggers, while becoming a major source of information and orientation for us all, are not always qualified journalists. And there are fewer and fewer of those around, thanks to the efforts of publishers, or at least  their controllers, to put them out of business. One day, they – and we – will all be sorry, but by then, of course, it will be too late…