Who Wants to be a Millionaire? I Did! 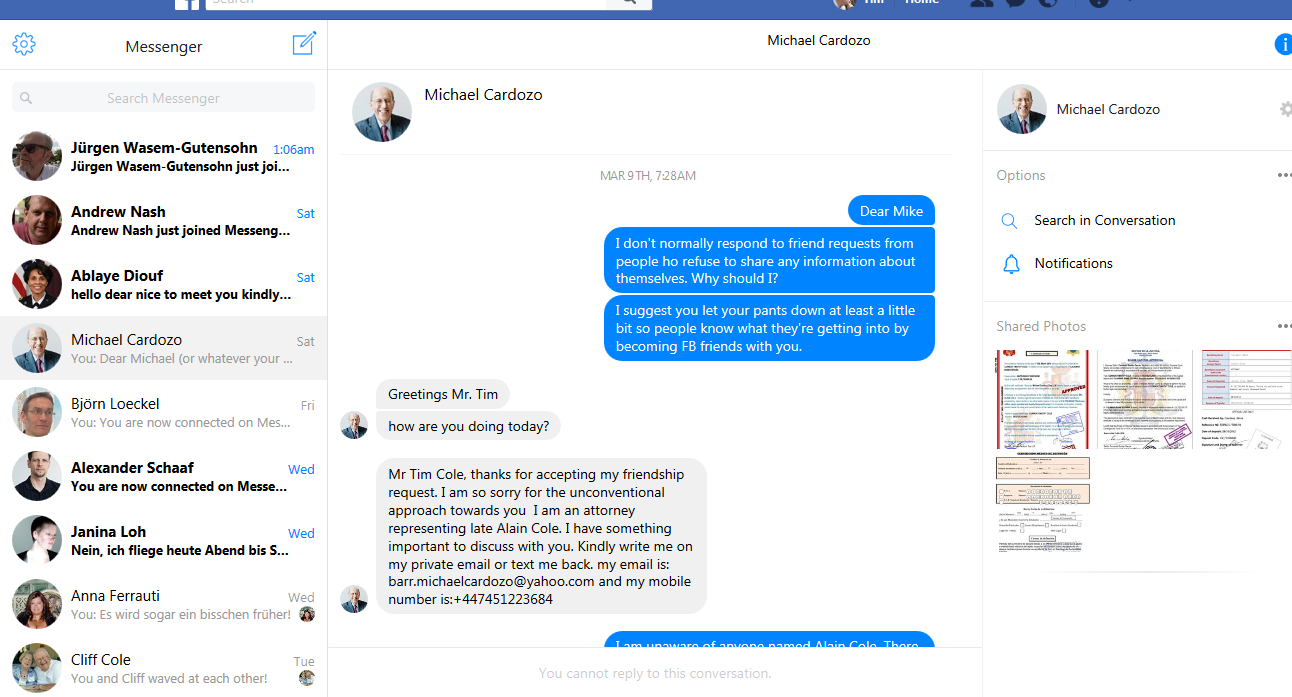 Perhaps I have been leading a sheltered life lately, but it is years since I ran across one of those infamous “Nigerian Scams”. Someone overseas offers you a share in a large sum of money or a payment on the condition you help them transfer money out of their country. They used to be everywhere, but I haven’t seen any for quite awhile.

So maybe that’s why my alarm bells didn’t go off at once when I received an invitation by Michael Cardozo to befriend him on Facebook. I did, however, check his Facebook page before responding and found – nothing! No information about himself, no posts, no likes. Just the picture of an thin, elderly guy in a business suit with glasses and a toothy grin and the message: “Greeting, Mr. Tim, how are you doing today?”

For some reason I resisted my normal impulse to simply delete this budding conversation, and instead replied as follows:

I don’t normally respond to friend requests from people who refuse to share any information about themselves. Why should I?

I suggest you let your pants down at least a little bit so people know what they’re getting into by becoming FB friends with you.

And that’s how I almost became a multi-millionaire.

In his next post, the guy introduced himself as an attorney working for a company called Proskauer in New York, which a quick Google search confirmed to be one of the oldest and largest law firms in New York, founded in 1875 and named in 2008 as the fastest-growing law firm by the Boston Business Journal. And yes, among the attornies listed on the company’s website was a partner named Michael Cardozo. And his credentials were impressive:  fellow of the American College of Trial Lawyers and a member of the American Law Institute, as well as a former president of the 22,000-member New York City Bar Association. Quite a résumé.

And then the guy floored me by announcing that he represented a client named Alain Cole who died in a train accident in Spain in 2013. Since then, he wrote, he had been vainly searching for any surviving relatives, but now he was convinced that I was the lucky guy, and he asked permission to present me to the authorities as the sole beneficiary of his late client.

Well, I may be slow off the mark, but this simply sounded too good to be true, and I wrote back:

“Are you sure this is not some kind of Nigerian scam? Cause it sure sounds like it.”

My new pal Mike sounded clearly offended. “What are you saying Mr.Tim Cole?”, he replied, and to prove his bone fides he included a postal address in London along with an e-mail address and telephone number. In addition, he suggested we move the conversation to mail “because I do not feel so comfortable discussing this on Facebook any longer.”

Okay with me. So over the next two days there followed a series of missives that began to sound more and more convincing. In them, he provided links to newspaper stories about the train wreck. And then things started to heat up. 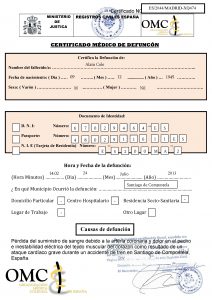 n a string of mails, he first provided a copy of a death certificate issued in the name of Alain Cole. Now, I have never met anyone called Alain Cole, but my great-grandfather’s name was Alan Cole, and according to family legend there was a distant cousin of that name who somehow disappeared from the family record decades ago.

About this time, a tiny glimmer of hope sprang up in my mind. I mean, everybody’s heard stories of mysterious “uncles from America” dying and leaving their fortunes to some unsuspecting poor slob in the Old World, haven’t they?

And most important, one crucial element in any good Nigerian Scam was missing. The guy had never mentioned any up-front payment. He did, however, suggest that I agree to pay him a contingency fee of 50% of any sum recovered.

That, I know, is standard practice with American law firms, so nothing to worry about. 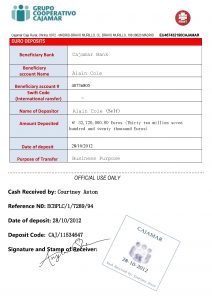 That is, until he sent me a balance statement, according to which said Alain Cole had left me a cool $32.7 million!

Okay, 32 million bucks is more than I can ever expect to call my own unless I win the lottery, so hey – why not let him have half? And anyway, I hadn’t committed myself to anything yet.

When I voiced some concerns about ethics and possible conflicts of interest, he reassured me: “You have nothing to worry about as this transaction is 100% risk free. I will use my position as the attorney of the deceased to successfully carry out this transaction.” 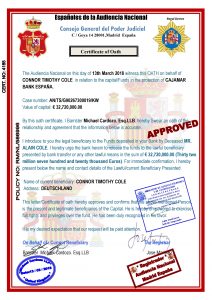 My wife was still worried, but I was beginning to get my hopes up that, just maybe, this was the equivalent of our winning ticket in life’s big lottery.

Mike started sending me very official-looking documents – a sworn affidavit by the head of the General Council of the Spanish judicial authority (“Consejo General del Podre Judical”) complete with stamps and signatures, and a power of attorney signed by the Spanish Ministry of Justice. The whole impossible scheme started to look at least remotely feasible .

And remember: He still hadn’t asked for anything in advance. 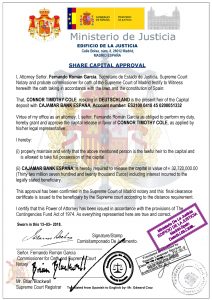 The only thing missing, it seemed, was a nod from the bank. And that came the day I received a mail from the International Remittance Department of the Banco Groupo Cooperativo Cajemar in Madrid asking me to please fill out the attached form to include, among other things, the name and account number of my bank so that they could transfer the money to me.

By this time, I admit, I was sweating, and my hands were shaking. I almost did as instructed – but one last little nagging doubt remained.

The head of the remittance department, who said his name was Antoneli Ramos, had provided a mail signature at the bottom, which included the bank’s web address, namely www.grupocajamars.com. I confirmed this by simply clicking on it and – presto! – I was on the official website of a major Spanish bank!

But then I looked at the e-mail address in the header. The mail server in the the return mail address was int.remittance@groupcajamar.com

The “o” in “grupocajamars” was missing. Amd there was an extra „u“ that didn’t belong there. I typed the URL into my browser and landed on a page with a link to a cgi.bin, but I was refused access. 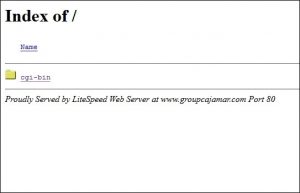 Something was badly wrong here!

So I did what I probably should have done at the very beginning, namely search for the mail address of the real Michael Cardozo on the Website of the law firm in New York and sent him a mail. And his response was fast and short: “Not me!”

A Google search for “Antoneli Ramos” also failed to produce results, except for the fact that “Antoneli” is apparentlynot normally a man’s first name in Spain, but a woman’s.

And so, finally and sadly, I sat down and wrote a last message to my good friend Mike:

“Dear Michael (or whatever your real name is). It has become obvious to me that this whole operation is just a new twist on the old Nigeria scam. But for the life of me I can’t tell where the sting is. Maybe you just want to try and get into my bank account, or you want to hijack my identity using the driver’s license and/or residence permit I stupidly sent you. But you made a few pretty dumb mistakes. For instance, it was relatively easy to find out that the real Michael Cardozo lives in New York and has nothing to do with you. I am in contact with him and have advised him to take action to protect his good name. Secondly, there is no one named Antoneli Ramos at Groupo Cajamar, as can be established with a simple phone call. Besides, „Antoneli“ is a female name in Spain. And thirdly, the mails I received from him or her were sent from a server called „groupcajamar.com“ which is a fake. The bank’s real address is „groupocajamar.com“ with an „o“. So this is the end of our brief association, and I will take measures to insure myself against identity fraud, so don’t even think of trying to pass yourself off as me. I am saving copies of our correspondence and will submit them to the proper authorities if necessary. So long and goodbye!”

And thus ended my dream of sudden wealth and a life of sinful luxury. Yes, it hurt. But even worse was having to listen to my wife saying over and over again, “I told you so!”

The Facebook page of the fake Michael Cardozo disappeared within minutes, naturally, so this tale will probably not serve as a warning about him to other dupes like me. However, the crook or group of crooks who cooked up this scheme will probably try again under other names, if they haven’t done so already. And yes, I would appreciate it if you, kind reader, would inform me if you have come across similar schemes so we can compare notes.

Above all, I would like to know where the real sting is. My buddy Mike never got around to touching me for anything, so I still don’t understand how he could have harmed me, which I assume was his intent.

And if nothing else, I now am richer by having found a new and quite ingenious twist to the old Nigerian Scam. Which just proves: on the Internet, you can’t be too suspicious of your new-found friends, at least until they prove themselves worthy of your trust.