Why did the Nazis respect Switzerland’s neutrality during WWII? 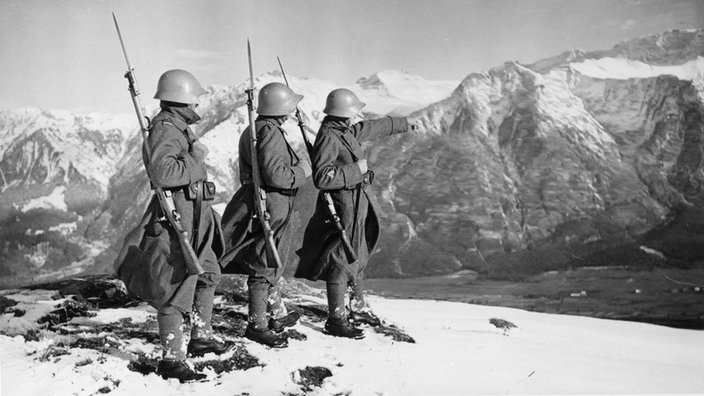 And you think Hitler was afraid of these guys? To that I say: ha, ha, ha!

Good question on Quora, given that Nazi Germany overran every single neighboring country except Switzerland. Ask the Swiss, and they’ll say Hitler was afraid of the “Alpine Fortress” and the fighting strength of their citizen Army in which all male Swiss adults had (and still have) to serve. In fact, they keep their rifles at home under their beds so that they can join their units within days or even hours.

This is bull, of course. The fact that Switzerland did not lie on an important attack route like Holland, Belgium, or Denmark and was therefore strategically far less significant was the real reason. But more important, Hitler wasn’t crazy enough to attack his own bankers, as the famous Swiss sociologist Jean Ziegler once said. Although Switzerland was nominally neutral, it was heavily involved in financing the German war effort, and local arms manufacturers exported more weapons to Germany and Italy than to any other country including the allies.

But even more important was the fact that the Swiss were willing to fence for the Germans: stolen artworks, bonds, securities, and above all gold were all passed over the border and deposited in secret numbered accounts, where lots of the loot remains to this day. There are estimates that up to one-fifth of all German gold reserves were converted into Swiss francs at one point or another. This allowed Germany to purchase huge amounts of scarce raw materials from countries like Spain and Portugal. In 1941, in order to finance Operation Barbarossa, the attack on Soviet Russia, Hitler asked for and received a war loan of a billion francs.

Besides, there was great popular support for Hitler among right-wing Swiss, who were at least as scared of Communists and Jews as the Germans. This did not mean that they were demanding an “Anschluss” like Austria, and ultra-nationalist parties never succeeded in gathering more than 10 percent of the vote. But Swiss authorities were more than happy to fall in with Nazi demands to close their borders to refuges. The parliament, or Bundesrat, even acquiesced to stamping Jewish passports with a big letter “J”.

This entire subject is largely hushed up in Switzerland today, where they prefer to believe the myth of a nation of modern-day William Tells, the “heroic community destined to resist”, as Swiss propagandists have claimed then and since.