Why is business intelligence important for an organization? 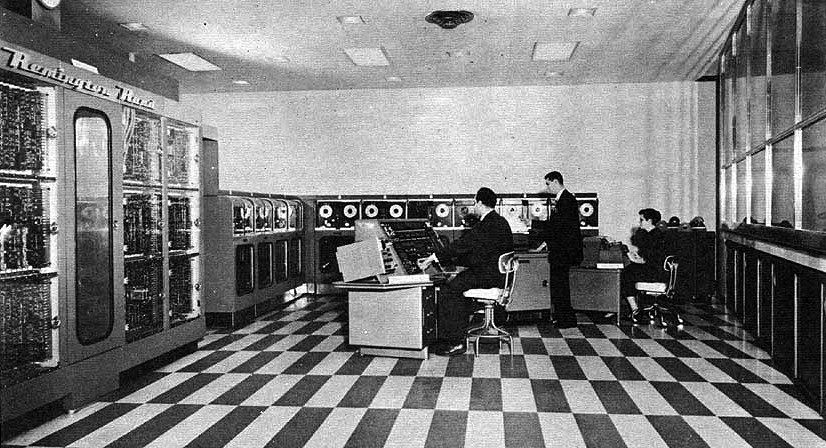 This is what a real computer looked like back in the earlies!

The term Business Intelligence was first used by Hans Peter Luhn, a pioneer of computer science. Luhn was born in 1896 and had been working for IBM since 1947. In 1958, he wrote an article entitled A Business Intelligence System which described methods for gaining and disseminating knowledge for and about business processes through information technology.

As a reminder, the largest computer at the time, UNIVAC I, consisted of 5,200 tubes and weighed 14 tons!

Luhns essay attracted a lot of attention because it opened up a new dimension in the computer world. Instead of merely solving admittedly very complex arithmetical problems, computers were henceforth to help people and especially managers to make more intelligent decisions by providing relevant information and defining so-called „action points“. These could be individuals, groups or an entire organization.

In 1989, Howard Dresner, an analyst with the Gartner Group, made Business Intelligence – BI for short – a key term in corporate management. Like other catchwords that emerged around this time, such as data warehousing, knowledge management and enterprise content management, BI is taught at universities and revered like a holy grail in executive offices. It is the basis for almost all processes, for the use of resources, for operative decisions and for monitoring.

In the beginning, BI was a backward-looking activity: it was about using historical data to describe the state of the company (descriptive analysis). Only later, with the advent of data mining, could BI be used to peer into the future. So-called predictive analysis allow the comparison of current and historical data in order to identify opportunities and risks for the company.

Only relatively recently have attempts been made to automate decision-making processes by linking the results of predictive analysis with models and rules in order to derive recommendations for action. Under the keyword Decision Engineering, attempts are being made to use the knowledge gained in Business Intelligence systems and to bring about consistent decisions throughout the organization.

Today we are once again at the beginning of a new era – that of artificially intelligent and self-learning systems. And here the keyword Business Intelligence does not go far enough.

Intelligent Business describes much better what the next years and decades will be all about. Companies and organizations have understood that AI gives them the ability to look to the future, predict demand and consumer trends, better serve their customers, and find and hire talent that has the skills to deal with the new reality of business. The goal is to become a smart company!

Artificial intelligence is the right way to do this – but what artificial intelligence do we mean? AI is driven by three things: huge amounts of data, cheaper mass storage devices and ever-increasing computing power. As Gordon E. Moore predicted, computers have become more and more powerful and cheaper; there is enough computing power today to cope with the ever-increasing amounts of data – think: Big Data – and neural networks based on the model of the human brain are becoming more and more common. AI technologies such as deep learning and cognitive computing are now possible at affordable prices. AI has finally arrived!

Even while the systems have become faster and faster, the algorithms have become more and more powerful. But what we have today is still only so-called „Weak AI“ or „Narrow AI“. That is what computer scientists call those AIs that have been built for a specific purpose. They are therefore only capable of solving a very narrow task – but they do it very well!

Although they are based on mathematical and computer science methods, they are strictly limited in their ability to solve problems. They lack any understanding of the problem they are supposed to solve. Weak AI – one is tempted to call it „stupid artificial intelligence“, if that were not a contradiction in terms – are quite capable of solving certain tasks better than human beings, but they are limited to this one task. Typical examples of weak AI are Siri & Co., but also industrial robots and autonomous vehicles.

What we think of as „strong AI“ are machines that are more intelligent than humans and can do everything that we humans can do. These strong AI (also called general AI) would be intellectually on the same level as humans or even a level above them. They would be able to solve all kinds of problems, act in a self-determined way, think and learn in advance, and they would be able to speak, i.e. to communicate in a natural language.

There is no such AI – at least not yet. However, experts assume that we will perhaps be ready in the next 20 to 40 years.

If that happens, we will have reached the next level, namely that of Artificial Super Intelligence (ASI). Such a system would be smarter than the smartest human who has ever lived (sorry, dear Albert Einstein…) This is what many people are afraid of, because in such a world mankind would probably no longer be the dominant species. Super-intelligent machines would be able to build even more intelligent machines, which would lead to an exponential, i.e. explosive, increase in artificial intelligence that would soon leave humans far behind. Ray Kurzweil, the serial startup and bestselling author, calls this state of affairs the technological singularity. He assumes that this will be reached by 2045 at the latest.

Other experts consider the singularity to be a pipe dream. In an essay published in 2018 (Will Artificial Intelligence Surpass Human Intelligence?), Jiachao Fang, Hanning Su and Yuchong Xiao of the University of Texas at Austin come to the unequivocal conclusion: „Machines cannot be superior to humans because they are far inferior to humans in things like emotional insight and creativity.

So there is still hope for humanity.