Why we need Digital Transformation 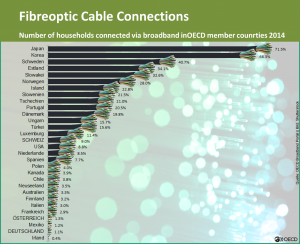 And how fast are you?

There can be no doubt: The future of business will be digital. The Internet has wrought fundamental change over the past twenty-odd years, but that is nothing compared with the upheaval yet to come in the next twenty plus. Networks and intelligent systems will cause huge growth, but unfortunately only those who choose to play an active role can hope to profit.

But are we ready for the Digital Transformation of business? Will the world see a kind of economic miracle similar to the one Germany experienced in the wake of World War II, a kind of “Wirtschaftswunder 2.0”? Or will companies and managers in the “Old Europe” freeze before the looming specter of total transformation of their business models, business processes and even their relationship with clients and customers?

Sadly, it looks that way. No, this doesn’t mean all companies are doomed to fail. And yes, there are many entrepreneurs around with vision and courage. Unfortunately, they are a minority. The majority of German companies, namely 70 percent, still require physical presence from their employees, meaning they will not allow them to work from home or from some other location (the nearest Starbucks?). This “ninetofive” mentality is a major stumbling block and one of the reasons why companies fail to make best use of the many opportunities the Internet Age offers them to increase personal productivity and give employees a change to accept responsibility for their own working environments and timetables.

Speed is essential in the new world of Digital Transformation: Data flow around the world in nanoseconds, and they can be received and processed anytime, anywhere. The only requirement is a fast Internet connection, and today that means fibreoptic cables and powerful computer systems that are capable of transporting and analyzing gigantic amounts of information – the crude oil of the Digital Age, as my friend Gerd Leonhard has called it – in record time.

Most of Europe lags behind the rest of the world and especially behind “emerging” economies in Asia and Latin America in terms of broadband connectivity. Germany ranks next-to-last in the OECD’s list of broadband usage, with only 1.1 percent of households and companies hooked up to the superfast grid; in Japan the number is 71.5 percent, in South Korea it is 66 percent and counting.

Increasingly, smartphones are the device of choice to view and process this information. Here, Europe is keeping pace with the rest of the world, with some 70 percent of German users under the age of 49 already owning one of these smart handheld Internet gadgets. People around the world have already cut the wires that used to bind them to their desktop computers, enabling them, at least theoretically, to determine themselves when, where and how they want to work. Some of us are at their most productive early in the morning when the rest are still asleep. Others prefer to work late at night. Some would prefer to read mails and study documents while pedaling on their home trainers, others may choose to work from a hammock in their garden.

“Loafer” is one of the less offensive attributes many superiors cast at such staffers, whom they prefer to keep an eye on during working hours in order to better control their working habits and thus, presumable, their output. These supervisors are possibly unaware of the fact that many employees have equipped their computers with “Boss Buttons” which allow them to make stock quotes, naughty pictures or the latest eBay auction disappear from their work screens by simply pressing a key if they hear the boss man approaching. Instead, it looks like they are deepenly engrossed in spreadsheet columns or their SAP applications; in short as if they were doing their jobs – which they actually are. Just not when the boss expects them to.

This deep distrust of their own employees is a worrying feature of the mental makeup of managers towards their staff members. And since they realize this, many employees play a game of cat and mouse with their bosses. In a digitally transformed company, there is no time for kiddie games like these. Were bosses and employees engaging in a dialog among equals, they wouldn’t need to. Both would know what needs to be done, which would allow bosses to let go the reins, secure in the knowledge that everyone agrees on what the goals are and how to reach them. And the employer would feel free to choose the best way to get to the desired result.

Digital Transformation, in other words, means that both sides will need to rethink the way work is organized. However, it is the boss who needs to make the first move. And time is running out…

But the load is also on employees to come to grips with a totally new situation; one in which he or she needs to accept self-responsibility. And the price of this new freedom is increasing accountability. As companies move to a system of management by results, everyone will be judged by their ability to deliver  on time. Employees must see themselves members of a team with all the other players either scattered half way around the globe — or possibly sitting at the next desk. Location in a networked world is less important that the ability to cooperate across borders and time zones.

Workers in the future will need to strive to keep up in a world in which the emphasis lies increasingly on personal competence and professional qualification. In a digitally transformed working environment there is less and less room for mediocrity. Or, to quote a foreman working in a German engineering company: “Anyone who has had to repeat the same mind-numbing task over and over again for years will be astonished to learn that things become easier for all if everyone knows more.”

Instead of grasping new opportunities, many managers seem to be either paralyzed with fear or caught in denial. According to a study published in early 2015 by the German IT employers association BITKOM shortly before the annual computer fair CeBIT, “every fifth enterprise is fearful for its continued existence.” This begs the provocative question: Is digitization a danger to developed economies?

At least most businesses, it seems, already recognize the need for more and more digitization. But are managers and entrepreneurs prepared to accept the consequences? Hardly.