Words with no meaning 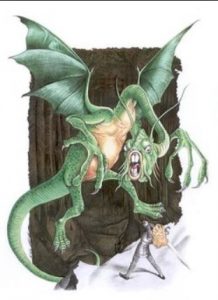 There are words that originally had no meaning but aquired one later. Lewis Carroll, the author of “Alice in Wonderland”, was especially good at making up words, many of which have joined the official canon. His usual method was to take two existing words and stick them together. If you can’t decide which word to use, but are forced to say something, they sometimes come out jumbled together. Or as he wrote in the preface:

For instance, take the two words “fuming” and “furious.” Make up your mind that you will say both words, but leave it unsettled which you will first. Now open your mouth and speak. If your thoughts incline ever so little towards fuming,” you will say “fuming-furious;” if they turn, by even a hair’s breadth, towards “furious,” you will say “furious-fuming;” but if you have the rarest of gifts, a perfectly balanced mind, you will say “frumious.”

Word that are the result of the linguistic equivalent of a head-on collision are called “portmanteu”, or suitcase words. For instance, in The Hunting of the Snark, Carroll invented the expression “to chortle”, which he described elsewhere as a combination of “chuckle” and “snort”. Today, the Merriam-Webster dictionary defines it as “to sing or chant exultantly “. “Galumph” is another word he coined by sticking together “gallop” and “triumph”, but is today used to describe something that moves slowly and clumsily, like a dray horse.

Carroll invented tons of new words that are in regular use today. In his poem Jabberwocky, he uses the word “slithy”, a combination of “lithe” and “slimy”. “Mimsy” is a combination of „miserable“ and „flimsy“. “Frabjous” could be a blend of “fabulous” and “joyous”.

Carroll isn’t the only one to use portmanteur words. Our daughter, when she was very young, invented dozens of words in German that everyone in the family still use today, such as “vorum” (”vorbei” and “rum”, both meaning “finished” or “over”). And for a good example from today, just think of “Brexit” – or maybe better not…