How to become an Austrian? Wait ten years! 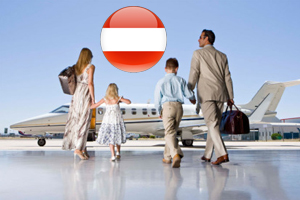 On Quora, somebody wanted to know how a US citizen could settle in Austria. Assuming that the question isn’t an indignant “how could you?” but a real request for knowledge, I sat down an wrote the following reply:

The best way is the one I chose, which is to marry an Austrian. That still means you will need to prove you can speak German. And not just broken German, either. Being a country of bureaucrats like their German neighbors, Austrians follows the Common European Framework of Reference for Languages, or CRFR, which classifies people depending on their degree of fluency.

To achieve the very first, or beginners‘ level (A1) you need to prove you can understand and use familiar everyday expressions and very basic phrases aimed at the satisfaction of needs of a concrete type; introduce yourself and others and can ask and answer questions about personal details such as where you live, people you know and things you have; and interact in a simple way provided the other person talks slowly and clearly and that you are prepared to help.

To actually qualify for a residence permit you need to achieve at least level B1 (threshold or intermediate”), which means you can understand the main points of clear standard input on familiar matters regularly encountered in work, school, leisure, etc.; deal with most situations likely to arise while travelling in an area where the language is spoken; produce simple connected texts on topics that are familiar or of personal interest; describe experiences and events, dreams, hopes and ambitions and briefly give reasons and explanations for opinions and plans. You need to reckon with at least a year’s studies to reach this degree of fluency, and in practice only 75% of all applicants make it through the final exams.

The new government, which currently consists of christo-centrist Austrian Popular Party (ÖVP) and the right-wing populist Free Democratic Party (FPÖ), has recently cut back the number of language courses being offered and has actively discouraged other social and church institutions from offering courses of their own. All this is intended as a clear signal: “keep out!”

Let’s say you managed to learn German somewhere and still want to move to Austria, you will need to apply for (and be lucky enough to get) a Red White Red Card (RWR Card), which resembles the American Green Card and is tied to a points system similar to the one in Britain which advantages “very highly qualified” applicants, usually those with a college degree in some vital area like hi-tech or medicine.

Your best bet is probably to bring enough cash with you to found your own company. But this doesn’t mean starting a Chinese laundry or an American cookie store. You need to apply at your nearest Austrian embassy or consulate and prove to them that your start-up will bring demonstrable benefits and know-how to the Austrian economy and create new jobs for locals. If you’re successful, you can be issued an RWR Card for one year which can then be extended until, finally, after ten years you can apply for Austrian citizenship. That, of course, means you will have to renounce your old U.S. citizenship, but hey, is that such a bad thing in the Age of Trump?