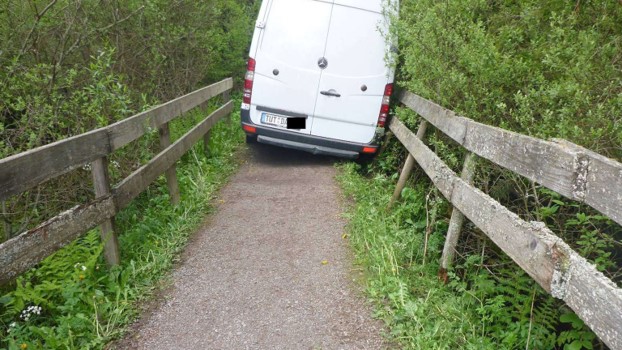 The biggest danger exponential technology poses is that we will become overburdened. Mankind has a long history of passing on its more arduous tasks to machines, starting with the plow and leading, in our time, to robotic lawnmowers and vacuum cleaners. We tend to delegate important decisions to our mechanical helpmates just because they’re there and we can.

Take the sat-nav, for instance. The minute we turn one of those gadgets on, we simultaneously switch off our brains and blindly follow the directions given to us – no matter where we end up. Too often, this means getting stuck in a wrong-way street or even in some swamp or bog. In a search for sat-nav blunders Google turned up thousands of results, including an item in the Daily Telegraph stating that “Sat-nav blunders have caused up to 300,000 accidents” in Britain alone. Town councils in England and Wales started setting up road signs as early as 2007 warning truck drivers of narrow thoroughfares where they might get stuck if they trust their digital advisors. Traffic engineers say over-reliance on technology has become a major hazard.

The futurist Gerd Leonhard fears that humanity will eventually lose control of technology, not because robots are reaching for power but because we are giving it up. He calls this “self-abdication”.

Machines, lacking consciousness, don’t think and probably never will. But, if we let them, they will make our decisions for us in a growing number of increasingly vital areas. Sooner or later, humans will no longer be able to understand how our machines reach certain conclusions; we will have, in effect, abdicated our self-determination.

In his 19th century novel The Time Machine, H G Wells describes a distant future in which the surface of the earth is populated by a race of small, elegant, childlike human beings called Eloi that live happy and carefree lives subsiding on fruit that grows in perfusion, all other needs being supplied by machines. Eventually, the time traveler in the book discovers that there is another race of ape-like troglodytes who live in darkness underground and surface only at night, the Morlocks. These creatures keep the machines running smoothly and in return capture and eat the Eloi. Mankind, it turns out, has evolved over time into two species: the Eloi are the descendants of the leisured classes, the brutal Morlocks are the progeny of the downtrodden laboring classes.

There are already indications that users and consumers are beginning to rethink their relationship with the tech companies in a big way. After two decades of often euphoric delight and approval as well as a willingness to rely increasingly on our gadgets, trust in technology is eroding, at least in the Western world, says Bhaskar Chakravorti of Tuft University, who led a study in 2018 that turned up a growing wave of digital distrust directed especially at the GAFA companies.

As digital skepticism becomes more widespread, it could conceivably lead to a countercurrent I would like to describe as “digital solidarity”. If everyone is angry, they can get together like the barn builders of the Wild West and do something – like increasing the pressure on the tech industry as well as on politicians. Shitstorms, after all, are nothing but the expression of shared frustration and furor, and they have proven capable in the past of bringing down company mail servers and causing computer systems to crash.

Back in the Wild West, angry citizens sometimes banded together and became vigilantes; a word borrowed from Spanish where it means “watchman”. The term digital vigilante, or DV for short, has been in use at least since the 1990s and describes people who use the internet as a weapon against those perceived to offend against custom and decency; effectively taking the law into their own hands.

DVs are driven by a variety of motivations including political, economic or moral grounds. For example, the Perverted Justice Foundation in America has waged an unrelenting war against pedophiles by outing police suspects, whether they have been found guilty by a court of justice or not. A sister organization in Britain, called Letzgo Hunting, recently accused a young software engineer named Gary Cleary of posting nude photos of small children online, which drove him to commit suicide. A spokesman for the local police force deplored this use of “amateur methods” which could possibly hamper criminal investigations and destroy the lives of innocent people. At worst, the true perpetrators might take warning, leading them to threaten or even kill the children involved in order to protect themselves.

Many DVs have a political background, such as a group of Chinese hackers who took down the computer systems at CNN, a move they justified as a protest against the broadcaster’s coverage of the anti-Chinese independence movement in Tibet.

Sooner or later, DVs will almost certainly turn their attention to GAFA and others, and they will use the weapons supplied to them by these selfsame companies. Launching a sophisticated Distributed Denial-of-Service attack (DDoS), flooding the victims’ computers and forcing them to shut down, is as easy as downloading some software from sites like LOIC (Low Orbit Ion Cannon) or HULK (HTTP Unbearable Load King) and following a few simple instructions. “Any eighth-grader can do it”, says Pavitra Shankdhar of the Infosec Institute in Elmwood Park, Illinois, a company specializing in enterprise security training.

LOIC is the digital equivalent of an intercontinental ballistic missile and the favorite tool of Anonymous, a self-named online collective of activists that has been blamed for a slew of radical actions and attacks against various organizations, government agencies and large tech concerns. It began as a kind of wacky digital funathon, with online activists joining the Blockupy anti-austerity protests in 2011, wearing Guy Fawkes masks commemorating the Catholic rebel who planned the failed Gunpowder Plot against the English government in 1605. Anonymous directed their first really large-scale cyber-attack against the Church of Scientology, followed by a whole series of incursions of victims such as Sony, ISIS, the German performing rights organization GEMA, and the Egyptian government.

A threatened attack on Facebook, attributed to Anonymous in 2011, proved to be a false alarm but others have followed with similar threats. A group calling itself DadaDada has called on internet users to “free yourselves from Google, Amazon, Facebook and Apple”. The group offers a slightly weird app on its homepage that replaces advertising with truly dadaesque images and music. The French software company Framasoft, whose motto is Dégooglison (the de-Google-ifying of the internet), offers a range of alternative products to Google’s such as Framapad which is supposed to replace Google Docs. Diaspora, billed as a Facebook killer, claimes to create “a social online world where you have control over your own data”. Users can set links to their existing social Web accounts such as Facebook or Twitter and access them from without, so to speak.

Activists like Anonymous are often grouped with terrorists but one person’s terrorist is, of course, another person’s freedom fighter; it all depends on who wins in the end. Most people on this planet are peaceful by nature and reluctant to chuck bombs, be those real or merely digital ones. For these people we need to come up with some new ideas.