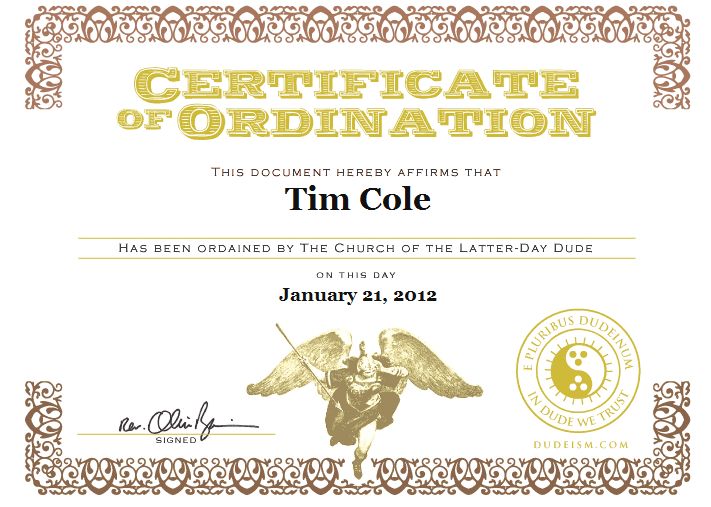 Gotta thank Alex Beam of the Boston Globe for this one: In his latest column, entitled „Dont call me Dude“, he refers to an organization which calls itself the Church of the Latter Day Dude whose mantra is „Just Take It Easy, Man“.

This is one really cool religion, let me tell you!

First of all, it’s ancient. At least that’s what they claim on their website: „Probably the earliest form of Dudeism was the original form of Chinese Taoism, before it went all weird with magic tricks and body fluids.“

Second, it’s based on one of my favorite films, „The Big Lebowski“ starring Jeff Bridges as a surreal, marijuana-smoking, 40-something character nicknamed „the Dude.”

And third and most importantly, you can get yourself ordained as a Dudist minister in minutes simply by filling out a short form and downloading your very own personal Certificate of Ordination to hang on the wall. As a Dudeist Priest, I can minister over religious ceremonies in most U.S. States. I’m not sure about Germany, where I live, but maybe I will be eligible for a cut from the so-called „church tax“ which the German authorities collect and distrubte to the officially recognized denominations.

As the scion of a dynasty of Protestant clergymen that traces its history back to James Cole, a Pilgrim who settled in Plymouth, Massechussets in 1633 – just 13 years after the Mayflower – I am painfully aware that I am the Black Sheep of the family; all my closest male relatives seem to be men of the cloth. Until now, I have comforted myself with the fact that I, too, preach, albeit a slightly different gospel. In fact, the highly-respected newspaper „Sueddeutsche Zeitung“ once called me the „Itinerant Preacher of the German Internet“, which helped.

Now, however, I can rest assured that I am really and truly following my family destiny. I intend to take my mission very seriously, spreading far and wide the central teaching of Dudism, which is: “Sometimes you eat the bear, and, well, sometimes the bear, he eats you.”