The Gentle Art of Being Rude in Vienna 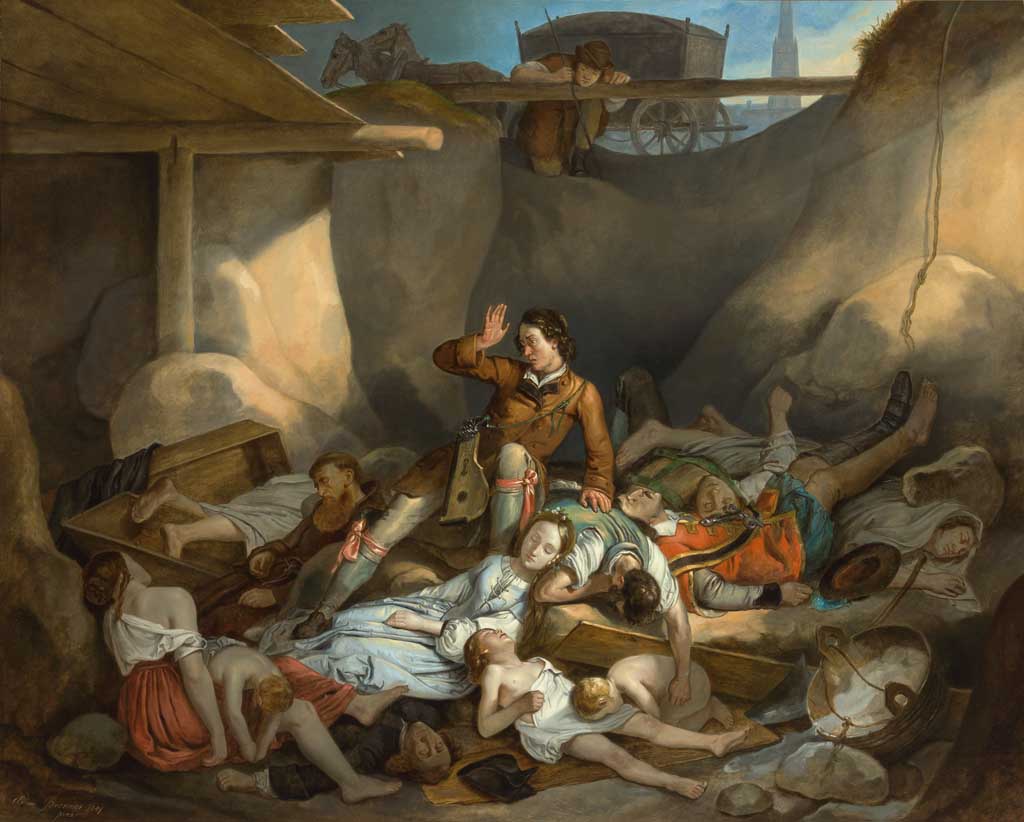 Adam Brenner: The dear Augustin awakes in the plague pit. Painting from 1841

Someone asked on Quora: „Why are Austrians seen as rude? Not so! I said. Actually, most Austrians are over-polite. They will don a saccharine smile and apologize profusely for nothing, but deep down you know they are making fun of you. I like to describe Austrian manners as “sugar-glaze culture”.

The only Austrians who go out of their way to be impolite are the Viennese, where something called “Wiener Grant” has a long and distinguished tradition. Some of the best cabaret performers like Helmut Qualtinger or Georg Kreisler used irony, satire, mockery, dark humor, political incorrectness and downright rudeness to criticize the authorities and the current state of affairs.

The roots of modern-day Vienna Cabaret can be traced at least back to the 17th century, when a culture surrounding impromptu poets like Max Augustin (“Lieber Augustin”) arose. The so-called “theater crisis” of 1873, triggered by an economic depression, forced the established theaters to close, and many new entertainment venues sprung up, such as the Varieté, which functioned as a mixture of circus and theater, the Chantant, or dance café, and the Singspielhalle, which was used for singing, acting and comedy performances. In it, solo entertainers and stand-up comedians were used for the first time as  intermission fillers until they were eventually given their own slots on the program.

Under the Habsburgs and especially in the period of harsh state censure under Metternich in the mid-19th century, these forms of humorous criticism of the times and politics were driven underground but continued to exist in the Viennese coffeehouses, where the literary scene gathered, but also among folk singers and couplet artists who continued to use critical humor, albeit in a slightly different form. In this period, a strong link sprang up between the two capitals of the Austro-Hungarian Empire, Vienna and Budapest, which in the meantime had developed its own brand of Jewish jargon comedy that quickly made its way to Vienna. Performances usually took place at the Budapest Orpheum, a seedy joint that moved around a lot but finally settled in Leopoldstadt in 1892. Later, comedians and cabaret artists in today’s sense like Armin Berg, Fritz Grünbaum, Karl Farkas, Hans Moser, Georg Kreisler, as well as Heinrich Eisenbach, who directed the Budapest Orpheum for a long time, discovered this stage for their own special brand of dark entertainment.

The Viennese cabaret of the interwar period was in close contact with the cabaret scene in Berlin. The Jewish cabaret artist and chansonnier Armin Berg took the song Der gewissenhafte Maurer (The Conscientious Bricklayer), written by Otto Reutter, and „Viennized“ it, giving it some local color.

After World War II, the Viennese cabaret scene was partly refounded by returning Jewish refugees. Karl Farkas, who had managed to escape to the USA, reopened the legendary Simpl. Gerhard Bronner, who had fled to Palestine via Czechoslovakia in 1938, founded the successful cabaret group Namenloses Ensemble (“Nameless Ensemble) in the 1950s together with Helmut Qualtinger and Carl Merz, who had already been active in the interwar period.

In the early 1970s, Austrian cabaret seemed to be a „fossilized“ variety of bourgeois theater that could hardly keep up with the rapidly changing social, cultural, and technological world. New forms emerged in connection with the incipient student alternative scene and with the beisl (a typical form of Viennese pub) culture. The breaking point for this was the 1976 arena occupation, which was less a „belated 1968“ and more a „Viennese Summer of Love,“ as music journalist Heinrich Deisl analyzes in his book Im Puls der Nacht (“In the Pulse of the Night”). Artists like Roland Neuwirth & Extremschrammeln, Kurt Sowinetz or André Heller gave Viennese cabaret a distinctly rebellious and revolutionary potential.

Today, cabaret in Vienna has settled down a bit and become mainstream, especially due to its popularity on television, but it still retails its unique mix of the literary absurd, mixed with disrespect for authority and the use of Wiener Schmäh, a uniquely Viennese type of ironic-cynical humor that is sometimes wrongly translated in travel brochures as “Viennese Charme”.

The Viennese are inordinately proud of their bad manners, and they will give them free rein any chance they get. I used to sit next to a guy from Favoriten, one of the less posh districts of Vienna famous for the uncouth manners of its inhabitants, and his favorite expression was „Oasch“ („ass“), which he used to address just about anybody.

Eine Antwort auf The Gentle Art of Being Rude in Vienna