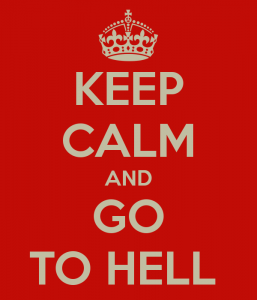 One of the most memorable headlines in the history of British journalism was printed by the Times of London on October 22, 1957: “Heavy Fog In Channel. Continent Cut Off“.

This has since become an iconic quotation by all who are interested in English attitudes towards Europe and the European continent. The implication is that Britain would get along fine without the continent and the rest of Europe, but the continent would be in a constant state of stress if they could not communicate with and travel to England.

Today, with a vote on Britain’s membership in the European Union pending, the same self-centered attitude is encapsulated in the virtually ubiquitous term “Brexit” – as if it was all about Britain  and it’s choice to remain or leave.

In fact, the term “Brexit” is misleading: It’s not the British that wants to leave – it’s the English, or at least the lunatic fringe in England (which unfortunately means about half of the population!)

If the upcoming vote were to succeed, politicians in Scotland have already made it clear that they will again attempt to secede from the United Kingdom, and Northern Ireland won’t be very far behind. As far as I know nobody has asked the Welsh what they think, but odds are that they, too, will eventually opt out of what remains of the Union – a relationship that was foisted on them, much against their will, by James I/VI back in 1707.

So it’s only about England, isn’t it?This despite the fact that the English will be the ones ending up holding the shitty end of the stick if they vote to leave. Every sane pundit agrees that an exit would cost millions of jobs in England. Researchers at the National Institute of Economic and Social Research say an exit from the EU would permanently reduce England’s GDP by 2.25 percent, mainly because of lower foreign direct investment.

And leaving won’t make them happier by freeing them from the tyranny of Brussels. If Britons were to leave, presuming they still want to trade with the rest of Europe, they will remain bound by virtually all EU regulations, including the working-time directive and almost everything Brussels dreams up in future. The only differnce ist that they will no longer have a say in what those regulations contain.

But there will be more unintended consequences. The loss of EU farming subsidies will be extremely difficult and costly for the agricultural sector in the UK to absorb. And the UK’s (or rather: England’s) status as one of the world’s biggest financial centers will be in jeopardy if it is no longer seen as a gateway to the EU for U.S. banks and their likes.

About the only thing the English would gain is the right to refuse entry to Polish plumbers.

Let’s put it this way: English proponents of Brexit are the UK’s equivalent of nutwing Republicans in America who are voting for a fraudster like Donald Trump just to spite the establishment. Sadly, both represent substantial portions of their respective populations. Both are completely and utterly mad!

But who cares about Brexit anyway except a few delusionals cut off on the wrong side of the Channel?

In fact, I think it is time to turn the tables. We need to start a Europe-wide movement to remove England from the European Community. We could call it “Brigotohell” – as in “leave”, “get out” “scram”.

The EU should start formal exclusion proceedings at once!

Of course, that won’t be easy. At present there is no provision under the Treaty on European Union for a member state to be expulsed from this exclusive club. But Article 7 of TEU provides for the suspension of certain rights if a member persistently breaches the EU’s founding values. Backsliding on the rest of the Union could conceivably fall under this category. If not, treaties can be rewritten.

If that fails, we could always fall back on Abe Lincoln’s strategy versus Southern Secession: Fight back! The EU could invade England. Send in the troops! Pevensey would make a good landing site.

Okay, maybe not such a good idea after all: The Brits (meaning: the English) still have nukes, unless the Scots confiscate them. And they’re nutty enough to use them, too! So back to plan A.

Its time to stop pussingfooting around here! If the majority of English are too dimwitted to understand that they need us more than we need them, then I say: to hell with them! Cut the islanders off from the continent, instead of the other way around.

And if, as I presume, the English come begging to be readmitted some day, then only on OUR terms, not theirs! Until then, lets get a movement going for European independance from what ever remains of Britain: Brigotohell!