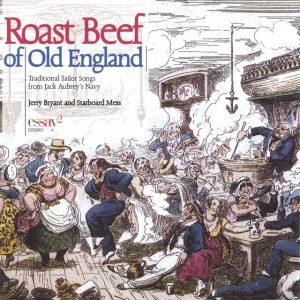 Why is English food perceived as terrible?, someone recently asked me on Quora.

Well, I guess it’s all a matter of taste, as the old lady said when she kissed the cow.

I think the answer is perfectly summed up in the English patriotic ballad The Roast Beef of Old England written by Henry Fielding for his play The Grub-Street Opera, which was first performed in 1731. It is intoned whenever members of the Royal Navy go in to dine at Mess Dinners, and has been adopted, among others, by the Royal Artillery and the U.S. Marine Corps.

The only snag is that roast beef wasn’t in fact widely eaten in medieval England, which makes the first and most famous verse slightly redundant; but that’s not the point.

When mighty Roast Beef was the Englishman’s food,

It ennobled our veins and enriched our blood.

Our soldiers were brave and our courtiers were good

Here’s the rub: The lyrics go on to say:

But since we have learned from all vapouring France,

To eat their Ragouts, as well as to Dance.

We are fed up with nothing but vain Complaisance,

So we learn that made-up dishes were considered effeminate and foreign: French even – the food of the arch-enemy! This and England’s abundance of cattle and sheep explain why the English cuisine long evolved around roasts – big, juicy hunks of red meat slow-cooked and brought to the table dripping blood.

Since the sheep were usually slaughtered only when they became too old to produce wool, they stank horribly of mutton, which unlike lamb is an acquired taste if there ever was one. The English cooks soon found a way to disguise this disgusting mauvais goût and invented mint sauce, which effectively cancels out any natural taste of the meat at all.

Add to this the typical English mistrust of all things vegetable which compels them to cook them into submission (a roast with „three veg“ is served with three identical blobs of a pale-white substance completely devoid of any recognizable flavor) and – voilá! – you have true English cuisine.

Okay, I have eaten very well indeed in England, but that mostly involved some kind of offal which, being cheaper, presumably used to grace the tables of most simple folk (the joints being reserved for the rich).

If you really want to experience English food at its finest, go to St. John restaurant in Smithfield, around the corner from the former Smithfield Markets, the great meat markets dating back to the 10th century. Here, chef Fergus Henderson boasts that he uses every part of the pig except for the „oink“. This is where I first experienced chitterlings – pork intestines crisp-fried on a stovetop, and split marrow bones roasted and served with a sprinkling of parsley. But for me, the absolute pinical of English cooking is reached when you part the crust of a well-made steak & kidney pie made with a generous glass of English stout – pure bliss!