A Short History of the Crapper

The history of the toilet begins at that moment when our ancestors stood up and began to move on two legs instead of on all fours. They probably didn’t think about where to relieve themselves. There are hardly any archaeological finds that point to the hygienic habits of early homo sapiens, so we must assume that they simply squatted down behind the next convenient bush. Only when people settled down and started to live in large groups did the question of where to go become relevant at all. It wasn’t about health – at that time nobody knew about bacteria and transmittable diseases – but about the noxious odors.

Fortunately, humans have a natural aversion to their own excrements, and so the question of where to put them became relevant at a very early stage. At some point the idea of the water closet was born. The first examples can be seen in the palace of King Minos in Knossos on Crete. The palace had four sewage systems that flowed into large stone cesspools. The king’s toilet, dating from 1,700 BC, already had a wooden toilet seat and a water box.

Sadly, the knowledge of this technology later disappeared again. Moses was very concerned about the disposal of feces. In the fifth book of the Pentateuch, the Deuteronomy, it says: „You shall have a corner in the forecourt of the camp where you can exit. In your baggage you shall have a shovel, and if you want to squat outside, dig a hole with it and then cover your need again!

500 years later, Jerusalem had a dense network of pipes and tubes for sewage disposal, which were regularly emptied, and the contents brought outside the city walls through the so-called Dung Gate.

The ancient Romans were famous for their toilets with running water that flowed into the Cloaca maxima. After the Germanic invasion, these facilities fell into disrepair, and in the Middle Ages terrible hygienic conditions prevailed. People made their business into chamber pots, which were often simply emptied out of the window, no matter whether someone was passing by downstairs or not. In the castles of the Middle Ages, there were often oriels with a hole from which the excrement plunged into the water below, presumable discouraging enemies from swimming through the moat. In the High Middle Ages, commode chairs were the rage among the wealthy. Basically, they were just mobile chamber pots in a richly decorated and velvet-covered box.

In 1596 the Englishman John Harrington designed England’s first flushing toilet – called the Ajax (i.e., a „jakes“, which was an old slang word for toilet). It was installed at his manor in Kelston. The forerunner to the modern toilet had a flush valve to let water out of the tank, and a wash-down design to empty the bowl. The term „John“, used particularly in the US, is thought by some to be a reference to its inventor, although this is disputed.

And of course no history of the toilet would be complete without a mention of Thomas Crapper. He was an English businessman and plumber who founded a sanitary equipment company, Thomas Crapper & Co, in London in 1861. Crapper held nine patents, three of them for water closet improvements such as the floating ballcock. He improved the S-bend plumbing trap in 1880 by inventing the U-bend. Most people assume that the word “crap” derives from the name of the company; however, that is a myth. The word is actually of Middle English origin and predates its application to bodily waste. Its most likely etymological origin is a combination of two older words: the Dutch krappen (to pluck off, cut off, or separate) and the Old French crappe (siftings, waste or rejected matter, from the medieval Latin crappa).

In 1775, a certain Alexander Cummings applied for a patent for the water closet, but it was slow to catch on. In the age of Queen Victoria, people usually continued to go for decorated chamber pots. Only a few sat on richly decorated porcelain toilets, which almost looked like works of art.

Incidentally, November 19th is World Toilet Day, which should remind us that not everyone on the planet has the luxury of a sewerage system and wonderful sanitary facilities. More than 40% of the world’s population do not have adequate hygienic sanitation facilities. In rural India, it is still usual for villagers to creep out into the woods to do their stuff, which can be downright dangerous if you stumble across a snake. I once participated in a improvement project in the East Godavari district of Andhra Pradesh where we helped install simple toilets as part of an NDA-sponsored project to eradicate open defecation. Each one cost $250, which was a fortune for these folks, so the Foundation took over half.

Finally, here are a few choice examples of “toilets” I have run across.

The pissoirs of the “Gasthaus Goldener Stern” in Freiburg in Southwest Germany strike a new note on the theme of pressure relief.

The American artist Illma Gore turned 24 handbags by Louis Vuitton into a luxury toilet worth 100,000 euros. 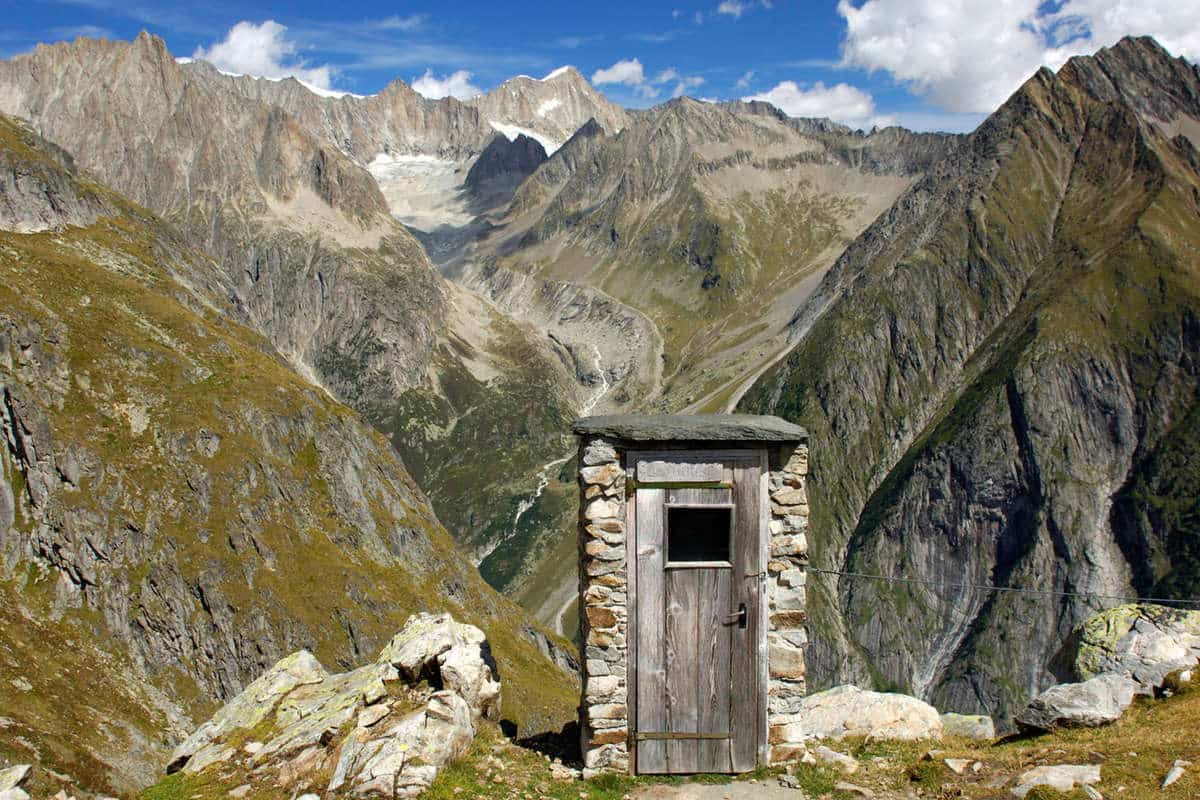 The toilet at the Wiwannihütte (2.470 m) in Switzerland offers a breathtaking view of the upper Rhone Valley. 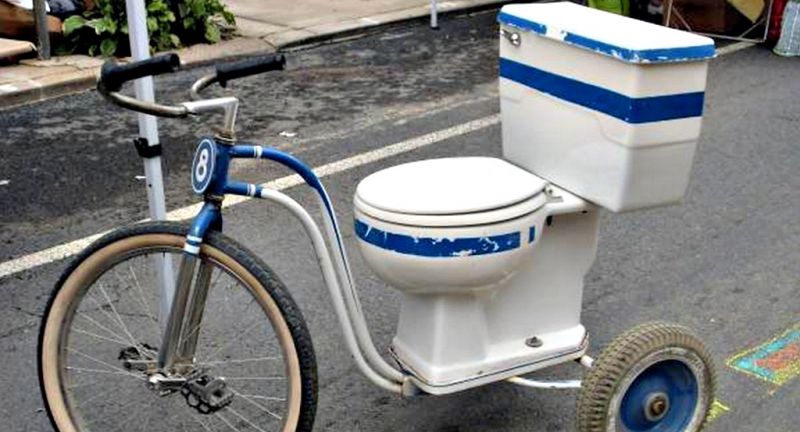 An artist in Victoria, British Columbia has designed his own functioning toilet tricycle- and now it can be yours for a mere $110! 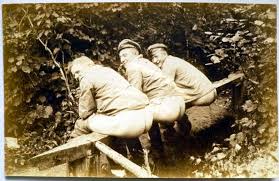 German soldiers in WWI relaxing on the “Donnerbalken” (“thunder beam”).