Born on the Fourth of July, so she Passed the Test 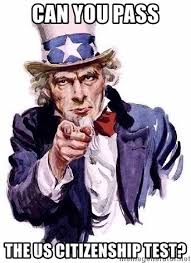 „When was the citizenship test last updated?“, someone asked me on Quora. I was curious, so I did a little research and found out that early naturalization exams were all conducted orally in the court room, so no records exist. Prior to 1906, naturalization was under the exclusive jurisdiction of the courts and at the local level naturalization procedures varied widely.

Because there was no explicit educational requirement in naturalization law,some judges simply did not test applicants’ knowledge of civics and American history. Other judges believed that the requirement of “attachment to the principles of the Constitution,” part of naturalization law since 1802, made it necessary for potential citizens to demonstrate that they understood the Constitution as well as U.S. history and civics generally.

In 1906 the federal Bureau of Naturalization began to oversee and standardize naturalization proceedings nationally. The tests remained oral and examiners maintained discretion to choose the questions. In the 1930s the INS moved to eliminate “trick” questions, such as “how high is the Bunker Hill Monument,” from the exam and worked to insure that questioning would establish the applicant’s attachment to the principles of the Constitution rather than the mere ability to memorize facts.

Even today, the actual civics test is NOT a multiple choice test, but an interview during which an officer from the U.S. Citizenship and Immigration Services (USCIS) will ask up to 10 questions from the list of 100 questions in English. Applicants must correctly answer 6 of the 10 questions to pass.

Certain applicants, because of age and time as a permanent resident, are exempt from the English requirements for naturalization and may take the civics test in the language of their choice.

All of which reminds me of my mother who entered the United States as a war bride in 1947. When the great day came for her to become a U.S. citizen, she appeared before a federal judge seated high up on his raised bench like on a throne looking down on her from a high like Jehovah in a flowing black robe. “What”, he asked her in an deep and awe-inspiring voice, “do we Americans celebrate on July 4th?” To which mom answered, truthfully, “My birthday!”

The judge kept a straight face and glanced briefly at the papers in front of him.

And from that moment on, she was an American!