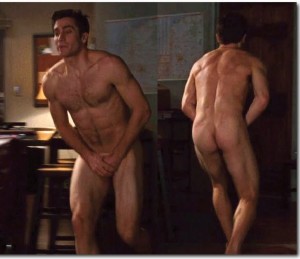 Not-quite-full frontal nudity, but at least no rear-view censorship

Last night one the long Lufthansa flight from MUC to NWR I watched “Love and Other Drugs“, featuring Anne Hathaway and Jake Gyllenhaal, and I can now confidently state that a) Anne has fantastic boobs, b) that Jake has a very good-looking ass, and c) Hollywood has not just come a long way – they have gone all the way. After an hour and a half, I not only heard just about every pertinent colloquial term denoting male and female genitalia and sexual preferences, but was also forced to view them in deathless Technicolor, along with the by now virtually obligatory fart from the leading actor (or possibly his bowel movement double).

Please don’t get me wrong: I could care less who chooses to expose what part of their anatomy or libido on film or stage. I live in a country where people actually enter the sauna without their bathing suits (I once almost got arrested as an exhibitionist in San Francisco because I forgot and walked into the hotel sauna “sans culotte”, only to be greeted by high-pitched screams from four elderly saunistas).

“Love and Other Drugs” did make me pause for thought, though, mainly because it appeared to me to be a rather pathetic attempt at demonstrating cultural liberalism. It was all so obviously forced and, frankly, embarrassing. Anne is an artist and social worker suffering from incipient Parkinson’s Disease (the “shaking palsy” of Victorian times), and she obviously intends to cram as much wild sex as she can into the time she has remaining. Jake is a salesman for Pfizer, the drug giant who made a mint with Viagra, and he accidentally swallows an overdose of his own medicine, causing his manhood to go into what the film euphemistically calls “overreaction”, winding up in the Emergency Room where we are treated to a close-up of the bulge in his BVDs.

Conceivably, Americans will point to films such as this to prove that, heck no, we ain’t prudes (or at least we are no longer). But truth be told, they prove just the opposite. Yes, Hollywood now brings up the courage to show a naked pair engaged in both missionary and doggy-style sex, as long as they can keep the actual essentials concealed by artful placement of potted plants or other visual impediments. And yes, they can use language on screen that would make a stevedore blush. But it is all so contrived, so evidently like a small boy scribbling obscenities on bathroom walls when nobody is looking. This is not sexual liberation and the casting off of Puritan bigotry; it’s the artistic version of frat hazing or binge drinking – something slightly irresponsible and adolescent, a test to see how much they can get away with before the grownups come and tell them to cut it out.

And finally, the film is proof that Lufthansa needs to rethink their policy about films they show on their entertainment systems, which are freely accessible to children. I am not in favor of trying to shield our kids from nudity; we took our daughter with us on picnics in Munich’s English Garden when she was eight or nine, where anyone wearing bathing trunks is considered overdressed. I would, however, draw the line on actors frantically coupling on kitchen tables or the sight of fat, hairy buttocks thrusting convulsively between two upstretched stockinged legs. In movie theaters, even in Europe, we have age limitations in place. Why not on airplanes?