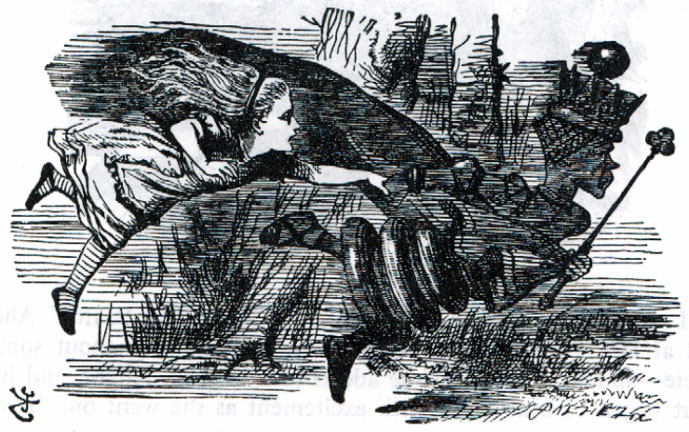 I feel the need, the need for speed!

In “Behind the Looking Glass”, Lewis Carrol’s charming little book for children of all ages, the Red Queen takes Alice by the hand and pulls her away, running hard until the little girl is tired out and has to stop to catch her breath. To her surprise, she discovers that she is still standing where she started off. When she complains, the Red Queen replies: “You must come from a slow sort of country! Now, here, you see, it takes all the running you can do, to keep in the same place. If you want to get somewhere else, you must run at least twice as fast as that!”

Welcome to the land behind the computer screen where we all have the feeling that things are happening much faster than in the real world; faster than we can realize or understand what is going on and everything seems to be happening at fast forward. The Internet has given us a new way of reckoning time: “Internet Speed”, a time frame sometimes defined as being seven to eight times faster than normal time –kind of like “dogs years” which most of us believe are seven times as long as a human year.

This is hard for many of us to grasp, and not only for the elderly. It has more to do with adaptability, flexibility, open-mindedness and willingness to accept the new than age. Possibly the best example is Twitter. Mankind seems divided into two camps when it comes to these tiny snippets of text which were once described as “Internet telegrams”. On one side are those who think Twitter is just about the stupidest thing ever invented; the others believe it’s the greatest thing since the telephone.

Twitter allows us to send messages that consist of 140 characters at most from our PCs or smartphones. These are first displayed on Twitter’s website, but since tens of thousands of these “tweets” are being composed every minute no one can hope to keep up, so everyone chooses a number of Twitter authors whom we want to follow, just like the disciples used to follow Christ. This means that we only see tweets from people we have chosen to keep an eye on.

You would be surprised how profound a message can be that is only 140 characters long. Of course, most of these messages seem to be proof that evolution can indeed go on in reverse, but very occasionally one will turn up where we say “wow!” 99 percent of all tweets may be pure drivel, but it’s worth it if you catch the one percent that is inspired. At least that’s what fans of Twitter say, and an astonishing number of them are mature adults; members of the “baby boomer” generation who are rapidly approaching retirement age or have already passed their due date. One of our acquaintances who goes under the Twitter name “@lusches” is in fact the middle-aged owner of a butcher shop who sends off dozens of tweets a day in which he describes making his latest batch of bratwurst, how delicious his lamb chops taste or what he is preparing for the next catering job. You would think this guy has his hands full, but no: somehow he finds the time to tweet.

Twitter is the heady mixture of self-expression and instant communication that seems so fascinating for many of us. “I am me and I am here” is the core message going out through this new conduit; a truly new medium and only one in a long row of technological innovations that are bringing us together and changing our perceptions of reality as we speak. At the same time, these innovations are putting pressure on us. Every attempt to communicate, every e-mail, every short message and every tweet feel like a call for help: There’s someone out there who desperately needs to get in touch, so please pick up, please send something back, talk to me! And because we are who we are we try to reply to every effort to communicate with us. “I’m in a meeting”, someone I called said recently — but he then went on talking for five minutes before he hung up. Heaven knows what the other people in the room were doing in the meanwhile; possibly checking mail or texting.

We all feel it in our bones: life is speeding up! We sit chained to our benches rowing to the beat of a drum that is going faster and faster, and we can’t even see the drummer who is compelling us forward. We are all little Alices, running as fast as we can in hope that we can stay in the same place and not fall behind.

“Accelerated progress”, Ray Kurzweil calls this, and he believes we these are still very esarly days. “The rate of progress of an evolutionary process increases exponentially over time”, he writes in his book “The Age of Spiritual Machines”. This means that technological progress in the twenty-first century will be equivalent to the progress made by mankind during the last 200 centuries.

But there’s a slight problem: Humans live life linearly. And to be honest we all know that exponential models have a tendency to collapse. They’re all just Ponzi schemes anyway, aren’t they? Sometimes the curves on the graphs just go up and up as if the law of gravity had been suspended. Just look at the “Dotcom Bubble” that burst in 2001, bringing all our dreams of instant wealth crashing down around our heads, disappearing down the rabbit hole just like little Alice in “Wonderland”.

This brings us, in a kind of roundabout way, back to the story of Alice in the land behind the looking glass and the question of how fast we need to run if we don’t want to fall hopelessly behind. Never has Lewis Carrol’s cute little story seemed as pertinent to understanding the world as it is today when social and psychological change is happening at Internet speed.