Watching out for Light Bulbs 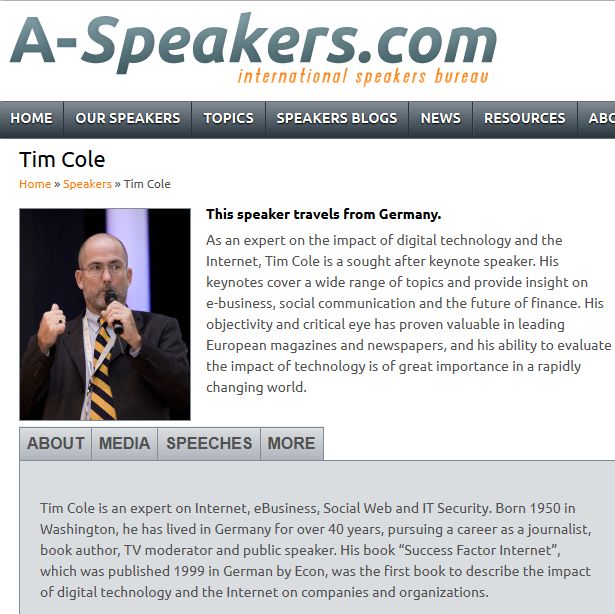 I recently sat down and did a short interview with Christine Gjelstrup of A-Speakers, a Danish agency with which I have recently begun cooperating. This is the result:

I’ve always been a techie, but I am also very interested in business and economics, so I guess my role in life is to act as a moderator or even a translator between those two worlds, since generally speaking businesspeople don’t understand techies and vice versa. I feel that technology is becoming increasingly crucial to the business success of enterprises; in fact, pull the plug on all those servers and gadgets and your average business today will simply collapse. On the other hand, engineers and software developers need to better understand what the business side really needs and to create solutions that are easy to understand and use and that really create value for the company. Naturally, the internet and digitalization are the key factors here, and in fact they have changed and will continue to change the way companies do business. Managers need to realize this and try to anticipate how digital transformation will impact their own business models, as well as using technology to reach out to digitally empowered customers (Who are very different from your old “analog” customer).

I try to understand what the client needs. Since some customers aren’t really sure themselves, this can involve a rather intense discovery process. I hate “canned” speeches, so I prefer to interact with clients in order to create a unique keynote; one that will give the audience the right takeaway.

I remember a speech I gave in front of 2.500 kitchen studio owners in Berlin. A few months earlier, I had bought a kitchen through an app called “Ikea Kitchen Planner”, and when I was finished, it turned out that there was no digital connection between that app and the ordering system at Ikea, so the saleslady had to retype every single article number which took hours. I use this example often to illustrate the need to create seamless digital processes within organizations, and I thought these kitchen professionals would love the story. After all, the probably hate Ikea, don’t they? When I finished telling the story there was no applause. In fact, the room was eerily silent. Later, someone took me aside and said: “Mr. Cole, I’m afraid the Ikea thing bombed on you. You see, we also have a Planner App, and it, too, is not connected with the back office…” I love it when reality proves one of my points for me.

I try to get down to the personal level and describe everyday experiences that everyone can relate to. It’s when I can almost see the light bulbs appearing above the heads of people in the audience that I feel I have done my job.

I believe that we as individuals and as a society will need to adapt in order to survive in the digital world, or at least to keep on leading meaningful and secure lives. We are in the process of collectively crossing the digital divide from an old-fashioned analog to an increasingly networked world, a world in which we spend more and more of our time in a kind of “world behind the computer screen”, in which, like in Louis Carroll’s “Alice Behind the Looking Glass”, many things look familiar, but many are very different. For instance the rules of the game. In Alice’s looking glass world, they play chess, but they play by different rules (the king can move as often as he wants). Similarly, in the new world behind the screen, some rules are different, and in order to play and enjoy life, we need to understand – and sometimes even make – the new rules. This calls for a higher degree of flexibility and creativity than ever before, and besides, the digital world runs faster, namely at internet speed. To keep up we need to constantly question ourselves as consumers, as citizens and as businesses and be willing to adapt. You can’t turn back the clock, so better look ahead.