Why don’t Americans all speak German? 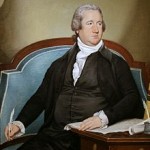 On Quora, I was recently asked this anonymous question: “Why did they choose English as the official language when they formed the USA in 1776?”

That got me thinking, and a quick Google search turned up lots of very interesting information.

If there was an official language, turns out it might have been German, which was spoken by  many Americans. English, on the other hand, was the language of the hated former colonial masters.

On January 9, 1794, a group of German immigrants from Virginia actually submitted a petition to the House of Representatives demanding that laws be translated into German. The vote was 42 to 41 against, with the German-born, bilingual Speaker of the House, Frederick Augustus Conrad Muehlenberg, abstaining and thus dooming the measure to failure.

This subsequently led to the famous „Muhlenberg Legend“ which can be found all over the Internet, namely that German almost became the official language of America but was defeated by a single vote. It’s all bunk, of course, but that doesn’t stop people especially in Germany from believing it.

Today, there are 49.8 million Americans who describe themselves as „German-American“, according to the U.S. Census. BTW: That’s a jump of 6 million between 2000 and 2010!

They’re a majority, too: Americans of German descent top the Census list of U.S. ethnic groups, followed by Irish, 35.8 million; Mexican, 31.8 million; English, 27.4 million; and Italian, 17.6 million. So while the fact remains that there never has been a vote for an official language on either a federal or a state level, a good case could be made for it to be German.

Or maybe we should follow the Swiss model an opt for multiple State Languages. They have French, Italian, Romansch (a kind of bastard Latin spoken in a few remote Alpine valleys) and German. The German-speakers also talk sommething called „Swiss-German“, which a normal German-speaker can hardly understand, so make that a fifth language!

A similar case can be made for confluting English and Irish, so that leaves us with German, English, Spanish and Italian. And let’s not forget the roughly 5 percent of Americans who are classified in the Census as „Asian-American„. Unfortunately, these fall into separate groups labled „Chinese„, „Filipino„,  „Vietnamese„, „Korean„, „Japanese„, „Indian„, and „Other Asian. Of course, in India alone there are 29 languages spoken by more than one million people, so it starts to get pretty complicated.