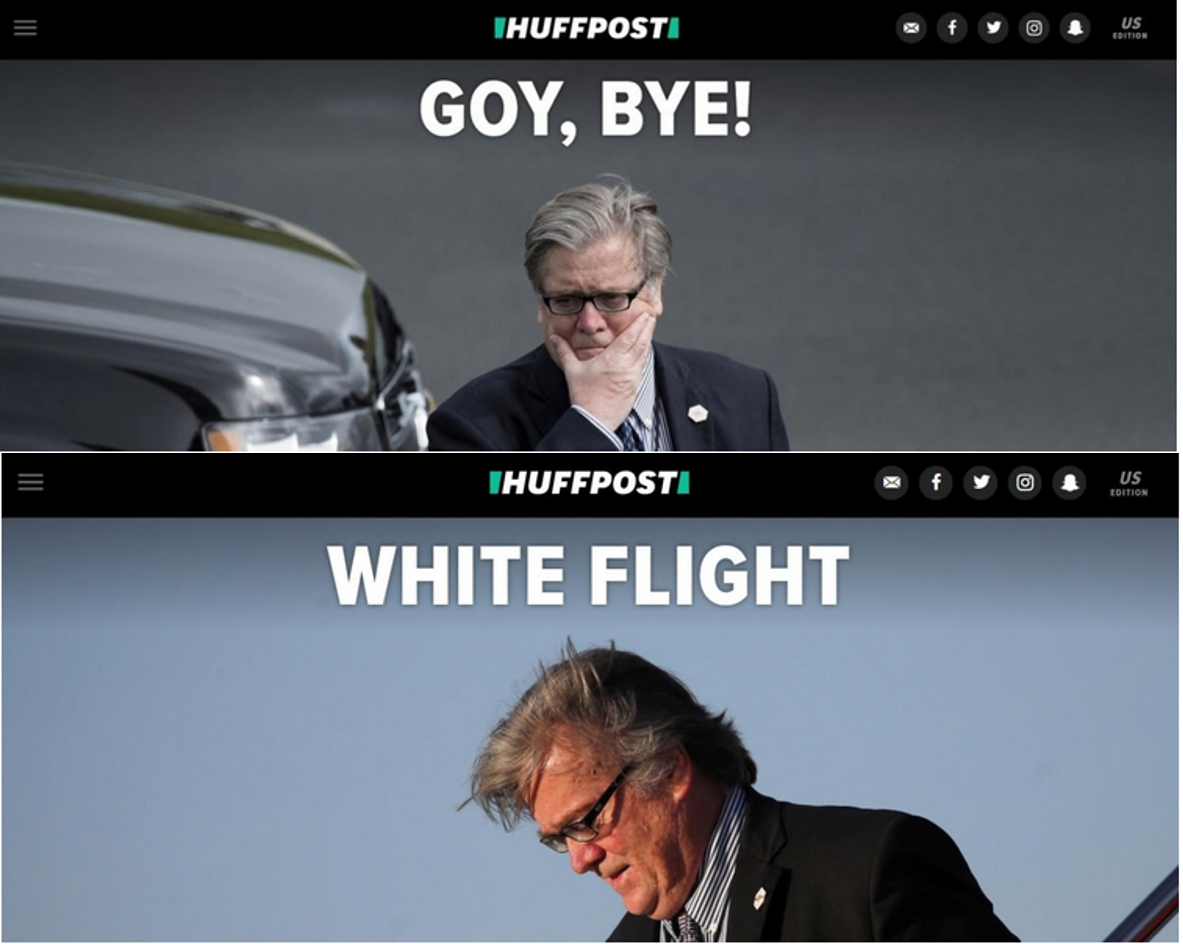 Kuddos to the Huffington Post for giving us one of the greatest headlines in recent times, namely „Goy, Bye“ for an article describing the firing of Stephen Bannon as Donald Trump’s strategy (now there’s an oxymoron for you) advisor.

However, I suppose it gave many of us cause for some head-scratching. I mean, nobody likes Bannon very much, but why, if you wanted to insult him, do so in Yiddish of all languages? I could think of a few choice words in plain English that would suffice for the occasion.

Yiddish was the language spoken by Ashkenazi Jews, who described themselves as Yids. The Ashkenazi, of course, are supposed to be the Jews forced to leave Palestine by the Romans after the destruction of the Temple and who settled in the area of the Eastern Roman Empire in what later became Eastern Europe and the Ottoman Empire, although recent studies in genealogy suggest that most of them are actually Europeans who converted to Judaism, so they aren’t really Semites at all (so much for anti-Semitism in Germany, Poland, Russia and other parts of Europe). The Sephardim on the other hand settled mainly in Southwestern Europe („Sefarad“ meaning „Hispania“ or „Iberia“ in Hebrew).

Like most, I always understood goy to be a derogatory term used by Jews to describe non-Jews. Americans, of course, return the compliment in spades. A list of religious slurs on Wikipedia includes no less than 12 obloquies aimed at Jews, including “Hymie”, “Kike”, „Sheeny”, and my personal favorite, “Shylock” (at least it shows that the person using it has read his Shakespeare…).

But it turns out that calling someone a Goy isn’t necessarily being impolite, at all. For this, I had to turn to Leo Rosten’s wonderful dictionary The Joys of Yiddish, which insists that the term means “nation”. If it is used at all in a negative sense, it implies someone is being insensitive or heartless; behavior which Jews experienced repeatedly over the centuries from their goyim neighbors.

But that still doesn’t explain why HuffPost chose that label for Bannon, no matter how insensitive and heartless me may be. It took Calum Borchers of the Washington Post to bring me up to date on the usage of the term goy in America. It seems that white supremacists have lately taken to adopting the moniker for themselves!

“White supremacists hate Jews and therefore stole a Jewish word to proclaim their non-Jewishness”, he writes, pointing to a Twitter post by David Duke, the former Klu Klux Klan grand wizard, under an online photo of Donald Trump at the Western Wall in Jerusalem, that read, “The Rise of the Good Goy”. So for certain people, Goy is actually a compliment, the ultimate sign of insiderness.

That realization apparently finally sunk it at HuffPost, too. A few hours later the headline suddenly disappeared, replaced by the trite “White Flight”. Apparently, the editors feared that Bannon would take goy as a pat on the back.