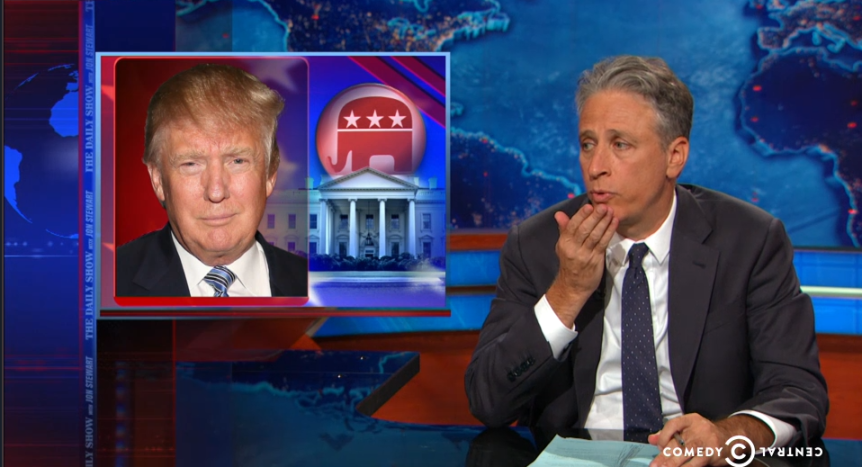 All the news that’s fit to watch

Former President George H.W. Bush may be 91 and recuperating from a fall that broke a vertebra, but he still is an acute follower of modern-day political events, and according to a report in today’s New York Times, he is disgusted. “I can’t understand why somebody could say that and still be taken seriously”, he said about Donald Trump after that worthy belittled Sen. John McCain for being taken prisoner in Vietnam.

Actually, this shows that the former CINC is way out of sync with how American politics has changed in recent years. Changed for the worse, in my humble opinion, but that is beside the point. American politics has undergone what I like to call the “Daily Show Effect”. This mirrors the fact that the satire program is consistently ranked as the premiere source of headline news among young people, especially.

Not that kids are dumbing down, politically speaking. In fact, viewers who watch both The Colbert Report and The Daily Show tend to be more knowledgeable about news than audiences of other news sources. According to a Pew Research survey conducted in 2007, approximately 54% of The Colbert Report and The Daily Show viewers scored in the high knowledge range, much more than the 34% of network morning show viewers.

What it does show though is that politics in America has succeeded in transforming itself into a form of burlesque comedy, with clowns dressed in dark suits repeatedly hitting each other over the head with inflated bladders, throwing pie in each other’s faces and bellowing nonstop strains of pure and utter drivel.

This is extremely amusing, and audiences rightfully treat it as a form of entertainment. What else?

In Germany, where disenchantment with the political elites is comparable to the U.S., people get mad and carry miniature gallows around bearing signs saying “reserved for Ms. Merkel”. In America, they howl with laughter.

Obviously, in such a political culture, the candidate with the highest entertainment value gets the highest rating. Which is why I don’t rule out a Trump term in office.

Respectfully, Mr. President, this is all the explanation you need for the “Donald Phenomenon”. Politics in the United States has become a huge joke. The only question that still worries me is: On whom ?

Perhaps the best news in recent weeks is that U.S. politics at least isn’t turning into a modern-day version of Rome’s “bread and circus” political system, the one which led to the dissolution of the the Republic and the rise of despotism.

Then, the end of democracy was heralded by the rise of political dynasty; the Julio-Claudians gave us the first five Roman Emperors: Augustus, Tiberius, Caligula, Claudius, and Nero. There once was talk of Americans following the same path. But with the implosion of Jed at least the danger of a Bush Dynasty has probably passed.

Unless, of course, there are a few gifted comedians amongst H.W.’s grandkids.