The Digital Future is on display in Lisbon 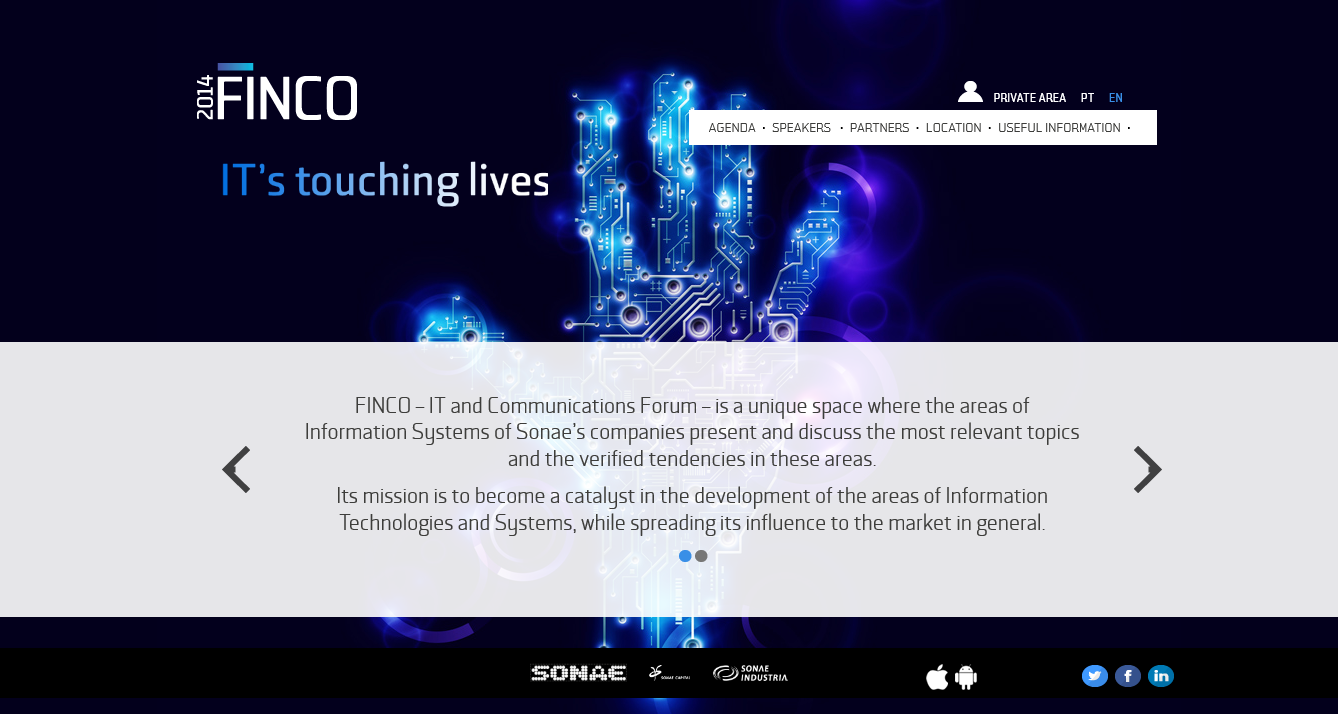 Next week I will be in Lisbon talking to a couple of hundred employees, partners and guests of Sonae, a multi-billion dollar corporation with roots in retailing and telecommunications. A highly innovative company, Sonae puts on its „FINCA“ conference once a year, and I will be on stage with my old friend, the „Futurist“ and author Gerd Leonhard. But first, I was asked to answer a list of questions for Sonae’s corporate magazine, and here is what I said in reply:

Are retailers prepared/able to embrace the latest technologies (like Google glass, e.g., adopt an all new approach in terms of retail/stock levels)?

Retailers would be wise to embrace the new technologies instead of ignoring or actively resisting them as many do today. In the networked economy, it is the customer alone who decides which channel and/or technology to use. If retailers do not offer their customers the full range of choices, then a certain number will simply take their business elsewhere. And customers are becoming more demanding every day. Amazon is being forced to invest in same-day delivery, not because they want to, but because customers demand it. The Internet is rapidly making the old supply-driven business model obsolete. Today, it’s all about customer empowerment.

Which are the main errors retailer make (or companies in general) when dealing with the customer 2.0? And which are the best practices?

Many retailers have adapted too slowly to the fundamental market changes brought about by digital technology. Retail today must be personal, authentic and open. Markets are conversations, as my friend Doc Searls wrote in the “Cluetrain Manifesto”. But many retailer are unable or unwilling to engage in a dialog of equals with their customers. Instead they still think that they control the message and can simply broadcast one to many like in the good old days. They don’t realize that the flow of information has turned completely around. Marketing communications and marketing departments have to function as inbound channels through which information about customers can be routed to R&D, Production and Sales Departments where they can be turned into products uniquely tailored to the wishes and needs of individual customers. “One-size-fits-all” doesn’t work any more.

Which are the most important trends that retail will have to adopt in the short term? And which should they get rid of?

Retailers must devote most of their efforts towards discovering the true nature of their customers and creating tailored solutions as quickly as possible – quicker than the competition, at least. In my latest book, “Digital Enlightenment”, I coined the phrase “Generation Now!” to describe a new kind of consumer: One who has grown up in an age of instant gratification where digital products are just a mouse click away, and where the ability to wait patiently is becoming a lost art. We may decry this tendency, but we can’t stop it.

Is the social web a way of getting in touch with the consumer, or, in some cases, where corporate communication fails (or doesn’t exist), the way of boring  him, or worse, pushing the consumer away for good?

We are entering the age of Total Communication, where everybody talks to everybody else all the time and everybody knows everybody else. Or if we don’t know them directly, our friends do: Scientists have measured the so-called “degrees of separation” between the 1.3 billion-odd users of Facebook and found out that they are all only separated by 4.7 “hops”: I know someone who knows someone, and so forth, times 4.7 – and that’s over a billion people! This is a huge opportunity for businesses to connect with their customers, but they also, as you say, face the huge danger of boring them away. Instead of shouting at the top of their lungs, as advertisers and marketers have been wont to do in the past, they should listen hard – and react as quickly as they can to what they hear.

How do privacy and security work in the age of Wikileaks?

Sorry, there is no more privacy in the Age of Wikileaks. But so what? Homo sapiens, we should remember, has spent most of its history as a species living in villages or tribal environments, and as everyone knows there are no secrets in a village. I believe we are in fact returning to mankind’s natural state, namely a world in which everything is known and everyone shares. Not that secrets aren’t important for our mental well-being: If we think everyone knows all our secrets we might go crazy and run amok. In fact, village communities tend to police themselves through a mutually agreed code of discretion: Everyone may know that these two are having an illicit affair, but we don’t stand in the market square and bellow it out. Why? Because that would disturb the tranquility of the village and lead to possible disorder and mayhem from jealous spouses. Instead, everyone pretends it’s still a secret, which works surprisingly well in practice. Maybe we need a code of “digital discretion” that will keep society from falling apart, but those are rules we as netizens must develop and apply ourselves; nobody can do it for us, and especially not politicians or policemen.

Anybody who really though Cloud Computing would be totally secure is a fool. As my friend Kim Cameron, the Identity Guru at Microsoft once postulated: “sensitive data will be leaked”. It’s not the Cloud’s fault: it’s a fact of life in the digital age. Instead of obsessing about data security and system integrity, we should prepare ourselves to react the minute sensitive data does what it is in its nature to do, namely escape into the wild. Yes, we can reduce the risk by implementing strong authentication and powerful identity management systems. But we also need to create emergency guidelines and fallback systems so we will be ready when those systems do fail, as they will from time to time. There are no 100 percent secure systems, and we would do good to remember that.

What can managers learn from ants?

How to be more effective. Ants are hugely effective in gathering food from many remote locations. Computer scientists are busy creating “ant-intelligent” systems that can analyze the huge amounts of information that “Big Data” is providing in less time and using less computer power that ever before. But there are other interesting forms of “swarm intelligence” that businesses can learn from. Take migrating birds. Geese fly in a wedge formation because the lead bird provides uplift for the whole flock. The other birds honk incessantly in order to encourage the leader to fly faster, but when the leader becomes tried it falls back and another goose takes over. This system of “rotating leadership” is already being used by large corporations, especially in the IT industry, and they are very successful. Instead of letting an individual rise to the level of his or her own incompetency, as we are taught in “The Peter Principle”, managers can move horizontally, thus gathering new skills, competencies and experience instead of being forced out because there is no room for them at the top of the hierarchical ladder.

Last: why do we need a “digital enlightment”?

My co-author Ossi Urchs, who sadly passed away last month, and I believe that we as a society are currently passing a kind of digital devide that separates the analog from the digital world. As more and more things become digital, they change, and the people who use them change, too. We increasingly find that the rules we made back in the Analog Age no longer work in a digital one. What use is the concept of copyright, incidentally an invention of the 18th century, in a world where there is no difference between original and copy? And how can we sustain a legal system that protects copyrights in the face of a growing population of digital natives who feel no sense of injustice when they “share” digital stuff with their friends? You can’t treat a majority of your people as criminals just because that’s how it used to be. We have to move on – and proprietors of “intellectual property” will have to find other ways of monetizing their output instead of simply printing and selling copies. I write books, but the money I get from my publisher is pitiful. Instead, I give speeches and thereby earn enough live quite comfortably, thank you.

I know many authors, screenplay writers, musicians and publishers hate this, but once again: They can’t turn back the clock. They need to adapt, as do we all. This process of adapting can be painful, because it means facing the unknown. That is what Digital Enlightenment is about: learning to think for ourselves and to create new rules and values for an emerging digital world. This is similar to what happened 400 years ago during the first Enlightenment, which incidentally was jump-started by the Great Earthquake of Lisbon in 1755, which coincided with the Reformation and caused many people to lose faith in divine providence. Voltaire took up this theme in his book “Candide”, and many others began to search for new, more rational ways of explaining existence and defining rules and values for a “New World Order”. Today, we are again at a crossroads, and I hope we will collectively be able to make the right decisions and create a digital world in which we can still lead happy and fulfilled lives. If not, we have no one to blame but ourselves.