The Robin Hood of Languages 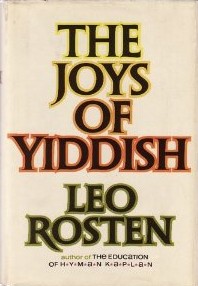 Did the Yiddish language start out in Italy or Germany? Another one of those questions on Quora that start the wheels in my head spinning round in circles, until finally this answer popped out:

Linguistically, Yiddish refers to the language spoken by Ashkenazi Jews — Jews from Central and Eastern Europe, and their descendants. Though its basic vocabulary and grammar are derived from medieval West German, Yiddish integrates many languages including German, Hebrew, Aramaic and various Slavic and Romance languages.

The most widely-accepted theory is that the language developed in the 10th century, when Jews from France and Italy began to migrate to the German Rhine Valley, especially to the Alsace. There, they mixed the languages they brought with them with the German spoken by their new neighbors, producing the earliest form of Yiddish. As Jews continued to migrate eastward – a result of the Crusades and the Black Plague – Yiddish spread across Central and Eastern Europe and began to include more elements from Slavic languages.

Yiddish is only one of many dialects created by Jews or adapted by them from other languages. Judeo-Greek was spoken in ancient Byzantium, and some Greek Jews continue to write Greek using the Hebrew alphabet. Persian Jews once spoke a form of Judeo-Persian. The Jews in Spain wrote Spanish using Hebrew letters. Ladino, or Judesmo, sometimes called Judeo-Spanish, is a Romance language derived from Old Spanish. Originally spoken in Spain and then after the Edict of Expulsion spread through the then-Ottoman Empire (the Balkans, Turkey, the Middle East, and North Africa as well as France, Italy, the Netherlands, Morocco, and England. Today, it is still spoken mainly by Sephardic minorities in more than 30 countries, with most of the surviving speakers residing in Israel.

In his wonderful book, The Joys of Yiddish, Leo Rosten writes: “Yiddish is the Robin Hood of languages. It steals from the linguistically rich to give to the linguistically poor. It shows not the slightest hesitation in taking in house guests – to whom it gives free room and board regardless of genealogy, faith, or exoticism.” He quotes the journalist Charles Rappaport, who once said: “I speak ten languages – all of them Yiddish.”

He argues that never in its history has Yiddish been so influential among Gentiles. Of course, Yiddish is much older than the brands of English we speak today, though it did not develop a literature of its own until the mid-nineteenth century. In recent times it has produced an impressive body of poems, novels, essays, and social criticisms. In 1978, Isaac Bashevis Singer, a Polish-born Jewish-American writer who wrote and published exclusively in Yiddish, received the Nobel Prize for Literature.

Rosten swarms about the “exceptional charm” of Yiddish – a “fertile lingua franca”, a “vocabulary of insights”. “The Jews were forced to become self-conscious from the day Moses warned them to invest every act with piety in preparation for a strict heavenly accounting.” Insight, he maintains, became a substitute for weapons – “one way to block the bully’s wrath is to know him better than he knows himself.” Thus the wealth of Yiddish terms that delineate character types: shlemiel, shnook, klutz, shlep, kibitzer, shnook, momzer, yenta, kochleffel, nudnik, phudnik (“a nudnik with a Ph. D”).

Purists have describes Yiddish as a bastard language, criticizing its “vulgar” idioms. But English, French, Italian, and German all started out as “vulgar” tongues – the vernacular of the uneducated. The better kind of people – priests, nobility and such – spoke Latin or Greek. In Russia, Poland, and the Balkans, the “refined” language was French – the national languages were reserved for servants. Yiddish provided a convenient linguistic bridge that anyone could use.

Before Hitler, it is said that 11 million people understood Yiddish, whose newspapers, books, and journals flourished in the United States. Yiddish theaters performed classic pieces in Yiddish translations, as well as original works in Yiddish and Hebrew. In Harper’s, William Dean wrote as far back as 1915: “With us [Americans] the popular taste is so bad, so ignorant, so vulgar, that it suggests the painful doubt whether literacy is a true test of intelligence and a rightful proof of citizenship. … The literary taste of the Russian Jews on the East Side is superior to that of the average native American…”

Yiddish has given the world a unique type of humor. A good example is a joke I once heard about a Yid (itself a contraction of the German word Jude, from which the term Yiddish is derived). It goes like this:

In tsarist Russia, a Jew fell off a bridge and started to drown, yelling for help at the top of his lungs.

Two tsarist policemen stood at the railing watching him trash around in the water and simply laughed.

“So drown, Yid!”, the policemen replied.

Just as he was going down for the third time, the Jew had an inspiration and started to cry “Down with the Tsar!”

The policemen immediately jumped into the water, pulled him out and arrested him for sedition.