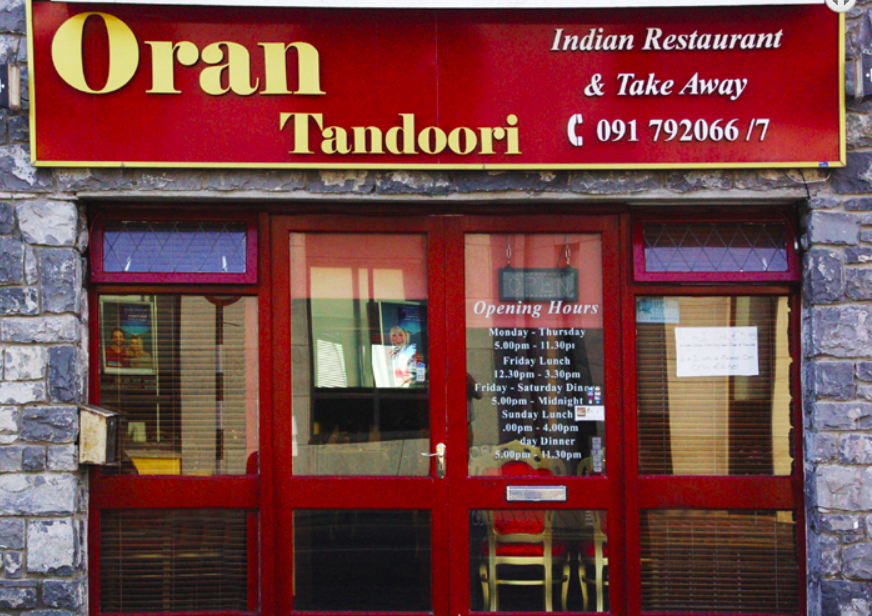 Yesterday my wife and I finally decided to take a taxi all the way out to the suburb of Oranmore (about a 20 minute ride) even though central Galway boasts more good places to eat per capita than most other comparable small to medium-sized towns in Ireland or elsewhere. We wanted out find out why Oran Tandoori is consistently rated Galway’s best restaurant, even though it lacks a vital characteristic, namely Irishness, that otherwise appears to be essential for any restaurant to succeed here in the West Country. I mean the place is Indian, for Christ’s sake! There are dozens of very good Irish places to eat in this fourth-biggest city in republican Ireland, and most of them proudly proclaim their food to be Irish, Irish, Irish, mate!

It turns out that Oran Tandoori is the kind of place you can find in London on every second street corner. It’s small and unpretentious. The owner greets you with the kind of smile you get all over India and especially in the South which is where the cook and his cuisine both hail from. This is not your standard Punjabi-style Kheema-and-Kebab fare, although the Tandoori of the place, as the name implies, is very good. The subtle mixture of spices and the generally higher heat of the dishes owe more than just a nod to the regions around Chanai and Karala, and I must admit that I have a weakness for the culinary sunshine-on-your-plate style typical for the very south of the subcontinent.

But what struck me most was that this is simply good Indian food; not great Indian food, not by any means. It reminded me of what an Indian friend once said when trying to explain why it is still relatively hard to find a decent Indian restaurant in India. “There is only one person in the world who can cook decent Indian food, and that’s my mother – and every Indian says the same.” Why else do tiffin-wallahs exist, if not to ensure that father gets his home-cooked food at his office, no matter how far away it is?

The cook at Oran Tandoori isn’t anybody’s mom; in fact he’s a he. But the principle remains: Indian food has to be good, not great. And in this Oran Tandoori succeeds magnificently. But why is it considered by so many people to be the best place to eat in all of Galway and environs?

I think this has more to do with TripAdvisor itself than with the restaurant under consideration. TripAdvisor has truly revolutionized the art of restaurant reviewing. I know, because for many years I was a reviewer for some of Germany’s leading foodie magazines such as “Der Feinschmecker”, “Diners Club Magazine” and the German edition of “Playboy”. I have since moved on to become an Internet journalist and book writer, but some of the tastes still linger. And I can distinctly remember that as a reviewer, I was constantly searching for excellence. Good just wasn’t good enough, it had to be superlative if it wanted to make its way into one of my reviews or the ones my colleagues were going to submit to our highly demanding editors.

TripAdvisor, on the other hand, goes by the simple question: did enough people like the place and the food?  And unlike to glossy gourmet publications, TripAdvisor lets anybody write. If it’s consistent, comprehensible and doesn’t look like it was written by the owner’s cousin, TripAdvisor will run it, regardless of grammar and often even of spelling (as I know to my shame, being one of the world’s worst proofreaders).

This is the true democratization of restaurant reviewing, and it leads to a significant shift on emphasis. If enough people think the food tastes good, than that’s it! The place gets the best ratings and recommendations. Good, on TripAdvisor, actually is good enough.

I admit that it brings us professional reviewers down a peg or two, but in the long run it leads to a more honest, and a more useful way of rating restaurants than allowing an elite band of self-appointed experts to tell everybody what they should eat.

So definitely, everybody, catch the next cab, drive out to Oranmore, and eat at Oran Tandoori. You’ll love it, no matter what I say.